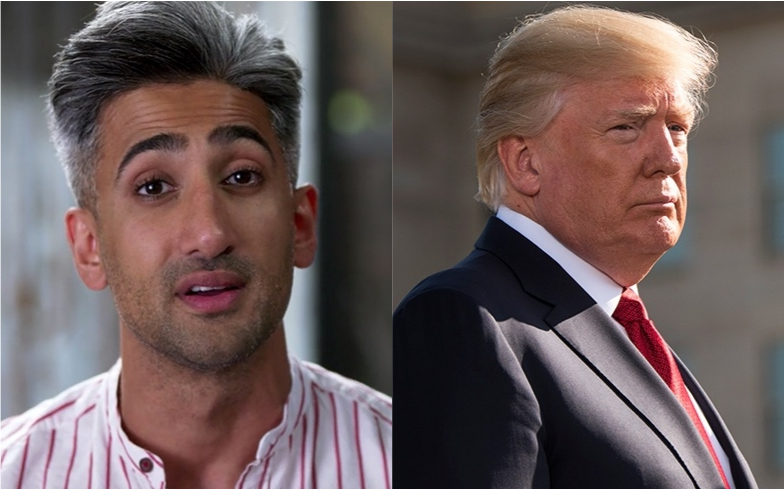 One of the reasons given was having to spend time with the President.

This time around, the Fab Five will be in Kansas, Missouri where they will be helping improve the lives of residents, including the show’s first ever lesbian.

However one person who won’t be appearing on this season, or any other season, is the current president of the United States, at least if fashion guru Tan France has anything to do with it.

When asked on BBC Radio 4 if Tan would like the president to appear on the show, he said: “The short answer is no.”

And one of the reasons that Tan gave for not wanting Trump on the show was that Trump would “actually have to spend a week with me and see me as an actual person.”

Tan also spoke about masculinity, highlighting how Queer Eye is “bridging the divide between people who have never met gay people before us.

“Let’s call a spade a spade, all of us boys on the show are liberals and the people we are meeting are mostly Republicans. It’s more about connection and positivity than just, ‘Let’s make them pretty.’

“It’s nice to be able to show we can find connection even though we come from very different political viewpoints.”

He added that masculinity was a “global issue” and that men feel “like they can’t articulate what they’re truly feeling and they have to conform to what’s expected of a man.

“We offer a platform for them to share their stories and to encourage other men to open up.”

Tan also called on television to become more LGBTQ-inclusive both here and in the United States, and opened about how he “seldom” experienced homophobia in Utah, but that he experienced it “way more in the UK.”

In our recent edition of Amplify, Tan spoke to us about the challenges he faced in being an ethnic minority on the show. “I know we’ve had gay Asian men on TV in the UK, but a gay Asian man in the US on a global show, that hasn’t been done before, and so I don’t just represent Asians for a UK audience, I represent Asians globally at this point, and that’s a lot of pressure for one person,” he said.

“I don’t think anyone should ever desire to be the first at anything like this,” Tan continues, “because there’s so much pressure on you to be perfect in every way, and that’s so stifling. I’m reminded of that every day. Every time I do something, the press will report on that thing as if I speak for every Asian person, or every gay person, or every brown person, or every immigrant. It’s frustrating, because I don’t, I speak for myself only. But I do love that I get to represent marginalised communities, because I’m constantly trying to do the most to make sure that I’m representing my communities in the best way.”