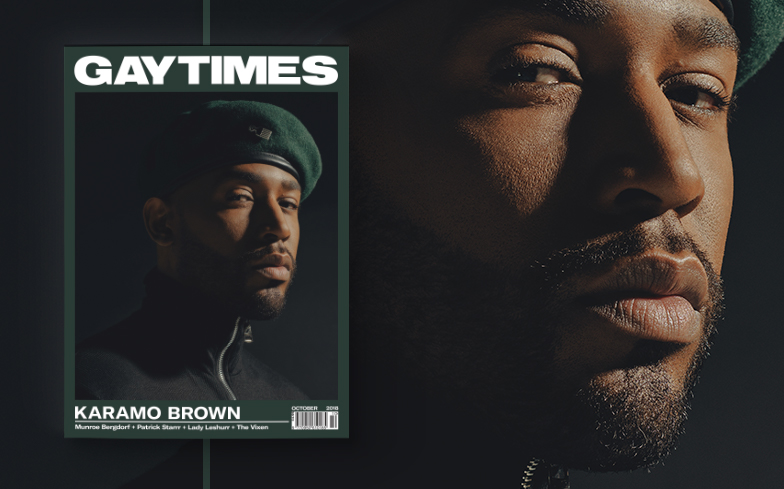 Earlier this month, Queer Eye star Karamo Brown opened up about his past suicide attempt during an inspiring video posted to his millions of followers.

As he covers Gay Times for the first time for our October 2018 issue, the culture expert explains why it was important he was honest about his past struggles with his mental health.

“We need to get to a place where we feel very confident about talking about this, because the lack of discussion, and the lack of openness is what’s killing us,” he told Otamere Guobadia for our cover feature.

“Me sharing my story is to save someone else, so that someone doesn’t feel like they’re lost, like they have to overdose, that they want to commit suicide, because I am a poster child… I’m a mental health professional, who lost his way.

“Anybody can lose their way. Because mental health is something you have to constantly work on and get support on.

“So if I can lose my way and feel like life is dark and there’s no importance of living, then I also can find my way. And I wanted people to know that they can find their way as well if they’re going through it.” Karamo also reflected on the importance of self care and knowing his limits when it comes to maintaining good mental health.

“For me, as a Black man, but also as a gay man, there were certain boundaries that I felt like I had to be loose with so I could be liked. And I think we all are affected by that to some degree,” he said.

“But for me, I’m very clear on my boundaries and I’m okay with them… And for me I can say to people: ‘Right now I want to support you, but I’m not able to’, so I appreciate you opening up, I acknowledge it, and let me give you some other resource of someone who can help. And that’s how I protect myself.”

You can read Karamo’s full cover interview in the October 2018 issue of Gay Times, which is available to buy now.

The star also teases what’s to come in the third series of Queer Eye, reveals the reason he was once cancelled from an American radio talk show, and how he is constantly having to fight stereotypes.