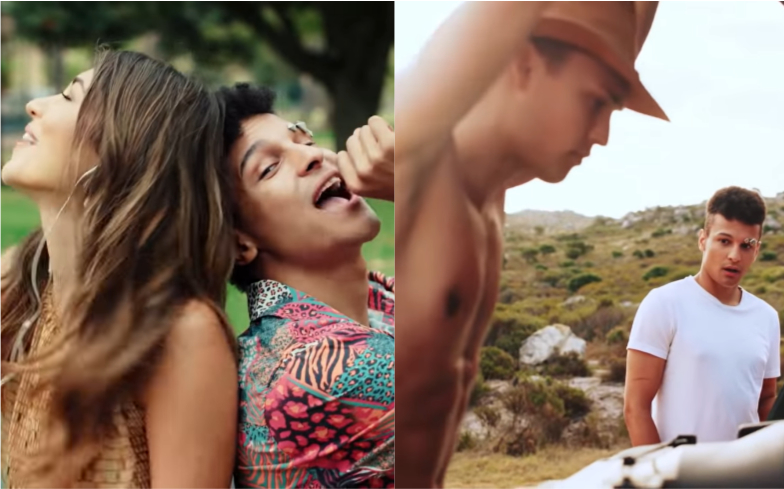 The German singer came out earlier this year.

And now the singer, who rose to fame after winning Deutschland sucht den Superstar, the German version of Pop Idol, has released his first music video since coming out, for the German re-release of his 2013 hit Easy Breezy, and it’s a celebration of his sexuality.

The original video saw Prince Damien fall for a girl, but she rejected his advances at every turn. Meanwhile, the singer was pursued by an older man who was after his affections. The video ended with Damien knocking himself out after slipping on a banana peel left by the girl he wanted.

In this video, Damien once again falls for a girl and tries to win her attention, but she snubs him. Later, when he’s on the beach, he becomes enamored with another girl, but she too snubs his advances, even knocking him to the ground with her surfboard.

It’s at this point that a handsome beach hunk helps Damien back to his feet before wandering off. As Damien leaves the beach, he’s approached by the girl he initially fell for, who is having issues with her car.

He agrees to help and as the girl walks off, he notices the beach hunk from before is also fixing the car. As the car gets fixed, Damien and the guy ride off into the sunset together.

You can watch the video by following this link, or by clicking below.

One of the models featured in the video, Simone Kowalski, also explained to PromiFlash that the video is helping charitable causes in Australia, saying: “Every click, that is, all income, is donated to Australia. This is a non-profit project and I am very happy to be part of it.”

When Damien opened up about his sexuality in the jungle camp, he explained that his preferences had shifted more towards liking men, and one of his fellow campmates, German soap actor Raúl Richter, offered to set him up with a friend.