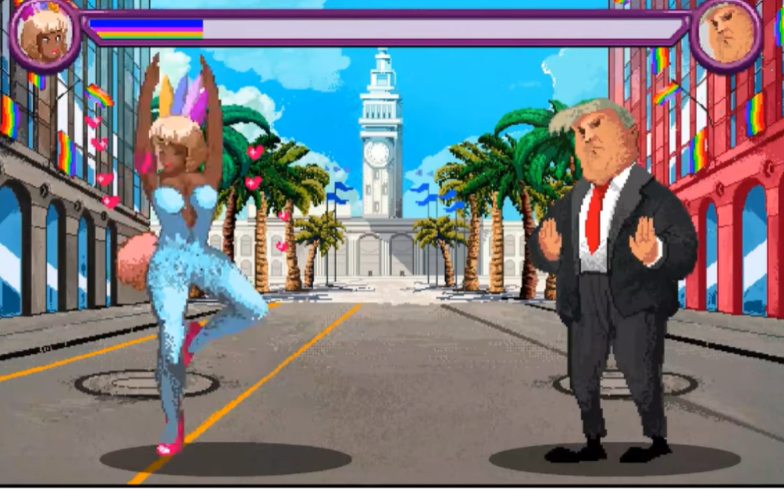 Pride Run will be released in the Autumn on Steam.

Pride Run is a rhythm-based game, and sees players keep a Pride parade on track, before taking on ‘Enemies of Pride’ in a one-on-one dance-off.

The ‘Enemies of Pride’ are styled after groups opposed to the LGBTQ community, as well as Donald Tr*mp, a shirtless Vladimir Putin riding a bear, and an internet troll sat in his mum’s basement.

Speaking to the Video Games Chronicle, Venturi reflected on why he chose to make a game for the LGBTQ community. “Three years ago I was producing a game called Riot: Civil Unrest, which is a game about fighting between police and rioters,” he said.

“So I had this pixel art crowd in the game already and then on October 11 it was International Coming Out day and I heard young people on the radio talking about coming out to their friends and family.

“It touched me and I wondered as a game producer if I could do anything to help this process: to help give young people courage and show that there’s nothing wrong with who they are.”

Some of the locations in Pride Run, like Russia or Turkey are hostile toward the LGBTQ community, something Venturi noted.

“I think it’s super important that games cover these issues,” he said. “First of all we want to make a fun video game, of course, but also build awareness for example that there is no Pride in Moscow or Istanbul – it’s very dangerous to be homosexual in those places still.

“If we make one in five players think about that, then we’ve done a good job. I think it’s very important to promote a message of inclusion in communities that aren’t always friendly.”

Venturi noted that some triple-A games were making steps, but called on them to improve. “I think Triple-A games do try to communicate some messages of inclusiveness, but it’s not complete.”

He added: “Internally when we think of LGBTQIAP+ characters in triple-A games, we are not dealing with main characters for example, but secondary plots. Today, LGBT [representation] in gaming seems to be about putting one lesbian or gay character in Overwatch and then moving on.”

Venturi said it’d be a “huge step” for a major game to feature an LGBTQ lead, before adding: “I’m very curious about The Last of Us 2, because it looks likely that the main character Ellie could be a gay character. Cyberpunk 2077 too seems to offer a lot of options for different types of players.

“In cinema we have iconic LGBT movies the Rocky Horror Picture Show or Priscilla Queen of the Desert… why not in video games? Games are the most important entertainment industry today.”

Related: New trailer for The Last of Us Part II confirms that the main character is a lesbian