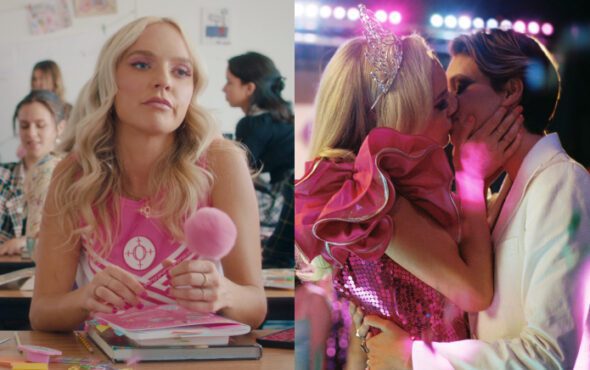 Zolita’s incredible new music video is an ode to the iconic lesbian cheerleaders throughout popular culture.

The visual for pop-rock anthem Somebody I Fucked Once – taken from the deluxe version of the star’s acclaimed debut album Evil Angel – sees Zolita reference “nostalgic, early 2000s rom-roms” as she plays the head cheerleader in a high school, decked out in a gorgeous, all-pink uniform.

Her character secretly lusts after the school’s outcast, played by TikTok star and actor Tatchi, before she finds it within herself to make a public proclamation of their love at prom. It’s one of the most entertaining clips of the years, and it’s queer as hell, so yes, we’re obsessed.

Speaking with GAY TIMES, Zolita says she wanted to explore the high school theme because she “didn’t see myself reflected in the teen movies” she saw growing up, and thinks it’s “important for queer people to rewrite their stories and imagine what their world could have looked like had they been in more accepting environments.”

“I first came up with the concept for this video while deep in the trenches of pottery gay TikTok! You could say I was… inspired. I combined that with my love of the lesbian cheerleader narrative. Brittana, from Glee, was my own sexual awakening and But I’m a Cheerleader is a forever favourite,” she says.

“This was probably the most fun video I’ve ever gotten to make because it was such a family affair. There’s cameos by my sister Luna Montana, my roommate – and lesbian icon – Shannon Beveridge, and Tatchi has been a friend for years. “I am so inspired by what they’ve done with their platform and was so thrilled to finally get to make something together! This video has so much heart and I hope it makes people smile… and sweat.”

Tatchi, who boasts over one million followers on TikTok – you can check them out here – says they’ve “always found a safe space in Zolita’s art” and that it’s been a dream of theirs to collaborate with the star (and reigning queen of witch-pop).

“So when this opportunity presented itself it was a no-brainer,” they admit. “I had just moved to LA to pursue acting with the hopes of being able to represent queer people in entertainment, so this was a very serendipitous first role to get to play. It’s so exciting to be a part of something that I would have loved to see growing up.”

Somebody I Fucked Once is available right now on iTunes and streaming services. You can check out the incredible music video – directed, written and edited by Zolita – here or below.

You can also stream Zolita’s debut album, Evil Angel, here on Apple Music or below.