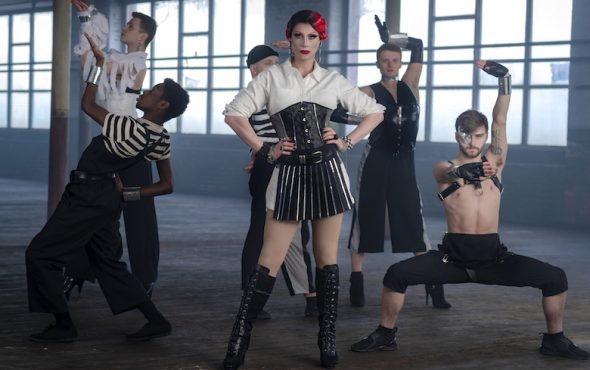 Divina De Campo has dropped one of the fiercest (and batshit crazy) music videos of the year.

In the visual for Gratify, the beloved drag queen and vocalist serves superhero-realness and Queen Elizabeth I-inspired fashion as she performs the infectious, operatic dance anthem with a sickening squad of voguers from the House of Suarez.

Divina blessed us with several legendary lewks on the Drag Race UK runway last year and won hearts of viewers around the world with her self-deprecating humour and wit, but we’ve never – we repeat, never – seen the star this savage.

“There’s definitely a bit of superhero stuff going on,” Divina tells GAY TIMES. “And it was really important for me to involve other people and different bodies. I didn’t want it to just be hot, big muscle-men or super cute, young little twinks.

“Lyrically, it’s that desire to give people exactly what they want. Musically, it’s a mixture of what my career has been up until this point; classical and mainstream pop work. It’s quite personal, but also not that personal!”

Gratify was chosen as the second single from Divina’s incredible debut EP, DECODED, to show a “more legitimate” side to her artistry than A Drag Race Song, which hilariously parodied the musical endeavours of past alumni.

“It stands away from that,” adds Divina. “It’s looking at what I want to say and what I want to do. It’s also one of the tracks that’s had a great response. I wanted to develop that, because I’m all about gratifying people!”

Watch Divina clash cultures in the fierce (and eerie) music video for Gratify – available now on iTunes and streaming services – below.

DECODED has received widespread acclaim from critics and Drag Race fans since its release last year.

“I’ve been listening to it a lot recently because… I’ve been trying to learn the words,” laughs Divina. “Nothing ever goes exactly how you wanted it, but listening to it, I think it’s a body of work. I’m so happy with the whole EP.”

Divina reveals that she plans to make more music videos for the tracks on DECODED, including one for pop anthem Pocket Rocket Princess, which may feature some special guest appearances from her Drag Race sisters.

“Soon as I’m able to get up and going with that, that will be the next video. That’s what’s in my head and that’s what I want to happen.”