Premiere: The Vivienne is a Bitch On Heels in fierce debut music video 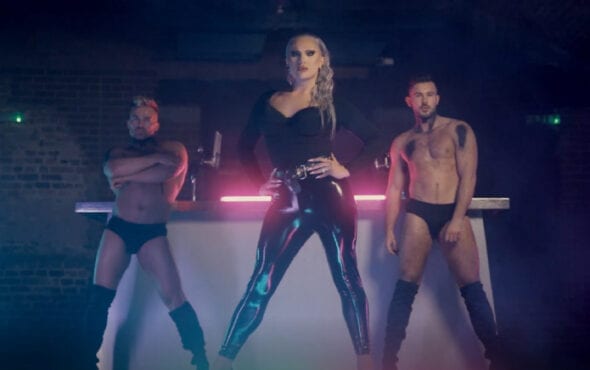 The Vivienne has released her first ever music video, and it’s one of the fiercest clips of the year.

In the video for Bitch On Heels, the Drag Race UK season one winner performs the brassy club-ready anthem in Heaven Nightclub, accompanied by two scantily-clad dancers and drag queens – including season two alum Tia Kofi.

Darius Shu, who received critical acclaim for his LGBTQ+ short film His Hands (2019), directed the clip.

The track, which warns listeners about the opposing sides of The Vivienne’s personality, was written by Oscar-nominated songwriter Diane Warren, who has written for icons such as Beyoncé, Cher, Lady Gaga, Mariah Carey and Whitney Houston.

When we spoke to The Vivienne for the single premiere, the star said Warren’s involvement was “surreal” due to her love for Cher and Aerosmith. The latter’s signature single, Don’t Wanna Miss a Thing, was written by Warren.

“They sent the demo and I fell in love with it,” she told GAY TIMES. “There was a period of time waiting to see if Diane loved it or not, and then she messaged me on Instagram to say she did. I think it’s my favourite song so far that I’ve done.”

Bitch On Heels follows in the footsteps of her debut single Tonight, as well her contemporary spin on Dead or Alive’s You Spin Me Round (Like a Record).

The Vivienne said Bitch on Heels is her first track that sounds like it’s sung by a drag entertainer, as she’s stated in the past that she didn’t want her music to “be singing about wigs or makeup or ‘Yaas queen!'”

“With my music, I liked if someone listened to it and didn’t necessarily think it was a drag queen song, but this one feels more that. I can see myself singing it on the road and it relates more to drag than the other music I’ve done.”

Bitch On Heels is now available on iTunes and streaming services. You can listen to the infectious anthem here on Apple Music and watch the music video below.