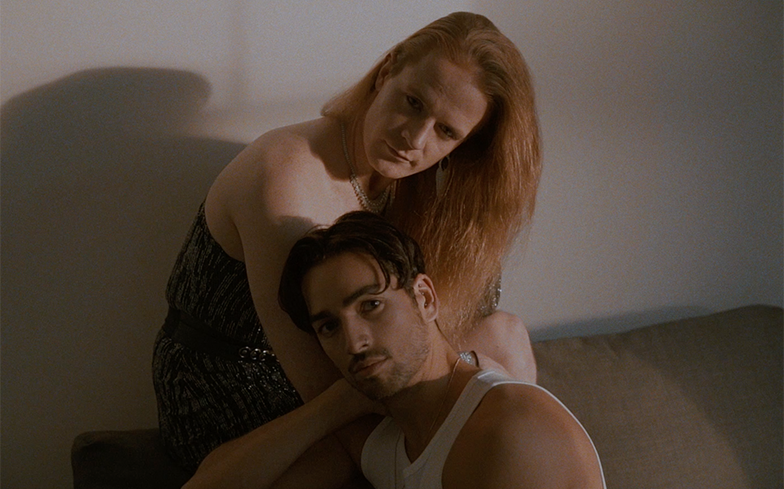 SXMSON’s new video is a beautiful depiction of loneliness between two queer people.

“I had known for quite some time that I wanted to include and represent an aspect of the drag community in this music video because I have so much respect for them,” SXMSON said of the video, which was directed and edited by LCPRN.

“The more I became good friends with people who are professional drag queens, the more I came to realise and understand how complex being a drag queen can be and how true it is that you can never really judge a book by its cover.

“It’s not all glitz and glam, as some people might like to think. Having Barbs involved in this project was amazing as they allowed LCPRN to capture an authentic and touching performance.”

SXMSON’s previous pop anthems touched upon topics such as love, desire and heartbreak, but Smile steers in a completely different direction, dialling it back to reveal the star’s on-going attempt to hide his mental health struggles.

In a statement, he said the song was written “as a reminder that you can never really judge a book by its cover” because despite how people might appear on the outside, “inside they can be going through really difficult times”.

“I wrote Smile when I was going through a pretty rough time mentally, even though on the outside I appeared ok,” he admitted. “Over the years, my smile became a wall that I had built to protect myself from showing my emotions.

“It wasn’t until I had come back from a trip to Berlin on my own, when I realised that I was causing a lot self inflicted damage. The world can feel like a lonely place, and I wanted to let people know that we all go through the same kinds of emotions.”

With Smile’s release, SXMSON wants to “capture the raw reality that comes with identifying as an LGBTQ+ musician”.

Watch the incredible video for Smile below.