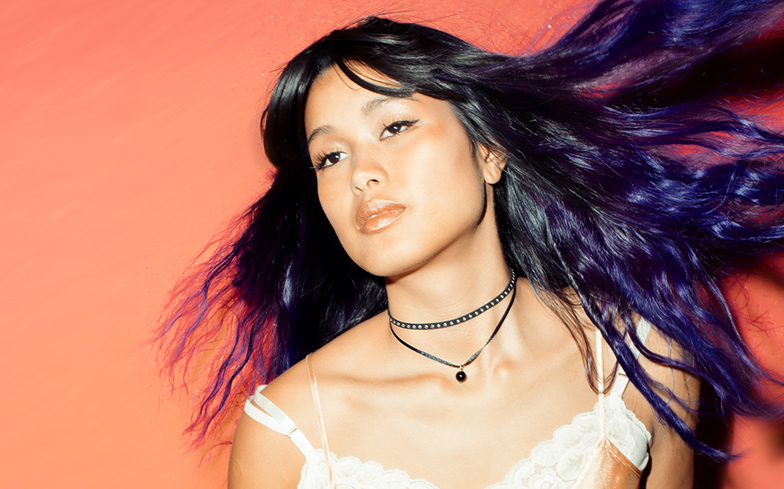 Raquel Lily has dedicated her new single to the LGBTQ community.

The indie-soul singer-songwriter and popular Twitch streamer is back with another single that delivers laid-back, lazy summer vibes with hazy vocals about discovering her sexuality… and her love of weed (there’s a reason it’s released on 4/20).

“I sigh when she is by my side, caress her lips with my fingertips, smile glowing so bright in the pale moonlight,” she sings on the track, making that double entendre clear before declaring, “Ain’t no other dame, she’s the one, her name is Mary.”

After performing the song as part of a Twitch livestream to help raise funds for coronavirus relief, we spoke to Raquel about the inspirations behind Mary, the pros and cons of being an independent artist, and raising awareness for LGBTQ equality.

Where did the inspiration for your new track Mary come from?
I’ve always wanted to write a song about the baddest bitch you know. Mary is about the infatuation with a woman; someone who is seen as a goddess and is worshiped as such by everyone. So much so that you just can’t help but fall in love with her. Being a big nerd for double entendres, it is also entirely a euphemism for my love for weed. A big inspiration for this song is Valerie, performed by Amy Winehouse. Although she didn’t originally write the song, her performance of it always made me feel this longing for this woman, which really struck deeply with my own sexuality. I always felt that her bisexuality was never something that biographers and such really mentioned about her, so this was sort of an homage to Amy, who gave me the courage to come out through my lyrics.

When so many people still find it hard to accept their sexuality, how important is it for you to speak out about LGBTQ rights?
Speaking out about things I’m passionate about is definitely something widely known about me, especially in my community. I often speak out about LGBTQIA+ topics and rights on my Twitch channel and broadcast under the its tag, as well. I believe that there’s always a potential for people to learn about rights, culture, and respect so I try to be a catalyst for at least an open discussion about all of it. Its incredibly important for me to use my platform as a means for people to feel accepted, safe, and understood. I find that sharing my own personal struggles and my willingness to be vulnerable about it helps some people with their own battles.

What are some of the struggles you’ve faced being an independent artist making music?
Mass promotion is definitely always a struggle. Trying to convince people you’re a legitimate artist without the tag of a big record label sometimes feels like a task. There’s a lot of grass-roots style ‘campaigning’ you have to be willing to do yourself to promote your art. No one really tells you that and the business aspect of being an artist is just something that is so overlooked. A lack of representation by a big business sometimes makes you look amateur.

At the same time, what are the positives of being independent?
Having been a neurophysiology tech and a legal assistant in the past, I learned how to run a business, so it’s nice to be really DIY and know exactly where your money goes. Less people working on your brand means more money to invest in yourself and your art. I also don’t ever have to worry about following someone else’s creative vision for the most part. I can create and release my art on my own time and at my preferred pace. I never have to jump through hoops to be able to deliver my music to my community and I think being accessible to your fans is a huge key to success and relatability.

You performed for a coronavirus relief fundraiser on Twitch recently. How important is it for people to use their voices to help others right now?
Yes, I was so honoured to be a part of it. I’ve been streaming on Twitch, playing music for over three years and I have never had an opportunity to play my music in front of more than 100,000 people before. I’m really happy to have been able to perform Mary and be on the same stage as celebrities like John Legend and Rita Ora. I think its incredibly important for as many people to spread awareness and positivity in a time like this. Music inspires such deep emotion from people and I think its important to keeping sharing this kind of creative energy with the world. Using a social platform to share my craft makes me feel like I’m making a positive impact on people’s lives and I can only hope others are doing the same.