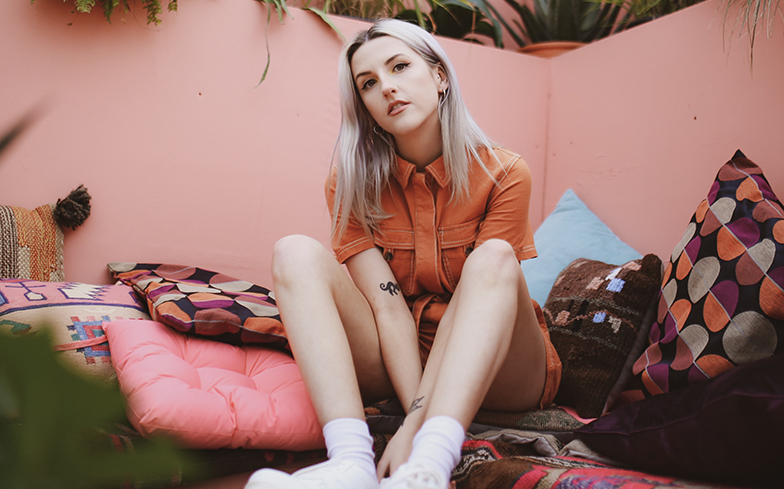 Ever caught feelings for someone who just didn’t get it? This one’s for you.

Now, she’s premiering the music video for Seriously? with GAY TIMES. The hand-drawn clip offers a glimpse into the colourful mind of the 22-year-old artist, and looks like it’s been ripped straight out of your teenage self’s favourite Tumblr page.

“The first time I liked one of my friends, she definitely thought we were just really good pals, and I didn’t know how to tell her. That’s why this song screams ‘I WANT YOU’ so unapologetically,” she explains of the addictive, summery synth-pop track.

To celebrate the release of the new video, we spoke to LAOISE about the story behind the song, who her LGBTQ inspirations are, and why she thinks queer female artists are having such a huge moment in pop music.

Where did the inspiration for Seriously? come from?
Before writing Seriously?, I had written most of my new EP, Mad, but I still felt like there was a certain track or feeling missing from it. As a project, I wanted it to represent a lot of very intense, specific emotions – love, heartbreak, anger and so on. So Seriously? became the track all about being madly in love with someone.

Does the person in question know you’ve written a song about them?
Definitely not! Sometimes I worry I might have specifics in a song where someone might think, ‘Is this about me?’ But it’s probably not enough for them to think so, or at least I hope! When I’m writing a song, I’m drawing from my life obviously, but I’m also writing in a way that I still want it to be relatable for listeners.

Do you think it’s important that queer artists are honest about their feelings and romantic experiences in their music?
For me, I can’t help but write about my feelings. I have a lot of them! But I have been inspired by artists who sing about their life and relationships, for instance Halsey where there’s a mix of hearing ‘she’ and ‘he’ in her lyrics and it’s not forced. I mean, most artists and songwriters sing about their love life, so it’s cool to see queer artists singing about theirs and it not being questioned as much, but more so celebrated as a positive representation.

When did you realise you wanted to make music?
I’ve always been obsessed with music. It was always the thing I was intrigued by growing up that I never put down. From learning the violin to teaching myself the guitar so I could write with it was sort of the moment I thought, ‘Okay, I really want to give this a shot’. I was about 11 then, and my perspective on life has changed drastically in the last decade since, but it’s the one thing that I need if I’m expressing myself now, because that’s the way I’ve always done it. I also think that being a creative causes you to see the peculiarities in everyday life, so it’s very cathartic to put those peculiarities into a song that become a thing for people to enjoy. How would you describe your sound?
Maybe like the feeling you get from eating popping candy! It’s colourful, flamboyant and when it kicks in it’s super satisfying! I draw a lot of inspiration from 80s pop too, and I have a lot of Carly Rae Jepsen, Troye Sivan and BANKS on repeat at the moment.

Did you have any LGBTQ icons growing up?
Not so much icons, but more so representation. Growing up bi in Ireland I watched a lot of TV, so I saw a lot of queer representation like Carol and Susan in Friends, getting married and raising a son together. With this, I thought it was chill to be queer, and I didn’t understand that there was a stigma until I was about 12, which was ironic considering where I was from. Looking back on it now though, there were some things I would’ve thought were positive to see, when in reality some people were capitalising on fauxmosexuality. But at the time, kid-me seeing any representation in the mainstream was cool, even if it wasn’t the most subversive. It feels like queer women are really having a moment in pop – people like King Princess, Hayley Kiyoko and Kim Petras – why do you think this is?
I know right? So cool, I got to see King Princess last month in Dublin, I love her. I was watching from upstairs, so I got to see a lot of the crowd and their reactions, something I guess I may take more note of as a performer myself. But the people looking back at her were completely and utterly themselves, it was so refreshing. Especially after witnessing that, my take on queer women now having a moment in pop would be that 10 years ago when I came out to friends, it was tolerated, whereas nowadays, it’s celebrated. The fact that there are incredible queer female artists that don’t exist for the male gaze is a first, and there being an audience that can relate to that is crucial.