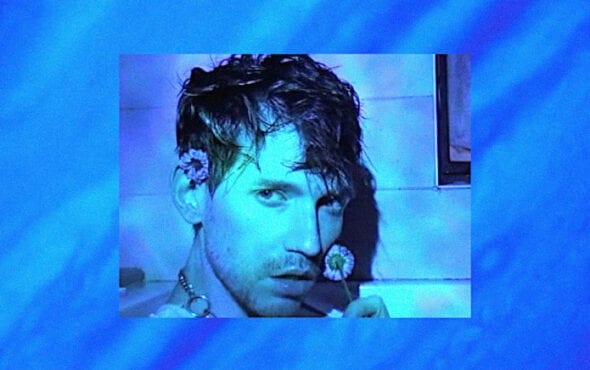 Gregory Dillon has unveiled the video for his rendition of Swing Swing.

The classic pop-punk debut single from The All American Rejects has been transformed into an darksynth, lo-fi anthem to suit the singer-songwriter’s classic nostalgic avant-pop sound.

In the self-directed blue-stained video, Gregory’s feelings of loneliness and (due to the coronavirus pandemic) captivity, of sorts, are on full display as he performs the track in a bathtub.

Gregory tells GAY TIMES: “During the past few months as an artist I reached a sinking/tipping point in my self worth and was spending a lot of time crying in the shower.”

“However, it was when sulking in the tub and daydreaming that I became inspired to film and edit a music video that showed where my mind goes during these intimate and sad moments,” he explains further.

“I decided to edit the film after the nostalgic space posters that lined my teenage bedroom, by Shim Schimmel, as they paralleled a time in my youth when I was looking to escape. For all the sad kids crying in the shower, I hope lofi and darksynth helps with the pain! PS. It’s always okay to cry.”

You can watch the intense video for Swing Swing here or below.