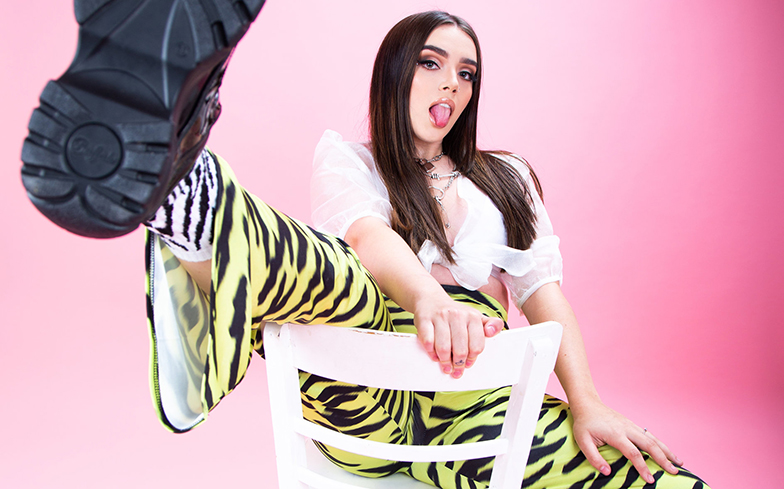 Amelia Carey is ready to be your new queer pop obsession.

Love Is Love has long been a mantra for the LGBTQ community to help win people over to the right side of history, and now British singer-songwriter Amelia has taken it one step further by turning the phrase into an empowering pop anthem.

“Are you finding it tough, because I’m growing up, and I wanna be touched by the woman I love? I’m still gonna love her tomorrow,” she sings on the heartfelt track, before diving into an irresistible hook that’s destined to be chanted with pride.

As the track premieres exclusively on GAY TIMES, we spoke to Amelia about her own personal coming out journey, the LGBTQ icons who have influenced her music, and celebrating queer female sexuality away from the male gaze.

First of all, where did the inspiration for the song Love Is Love come from?
Love Is Love means so much to me. This song is really a piece of my heart and I’m so anxious yet so excited to be able to share it with everyone. The inspiration was drawn from my experience of coming out as a lesbian to my family, and friends at the time. Some took it badly, some took it well. It is about accepting people’s opinions on it while also overcoming them and moving past it as coming out was my own journey and self-realisation, and no one else’s opinions matter because it’s my sexuality. My whole life I have sort of felt like I had to hide behind a facade – cringe I know, but it’s so true, I was brought up in an area where being gay was like, near enough unheard of. Compulsory heterosexuality is definitely something I had to deal with growing up, I identified as bisexual from a young age but I always knew deep down that I was only interested in women. So it’s basically all of this crammed into one song and it means the world to me.

Are the lyrics meant to reflect your own personal experiences, or the experiences many LGBTQ people go through?
I wanted the lyrics to resonate with both areas. Although the inspiration is largely taken from my own experience I feel it’s widely relatable, especially within the LGBTQ community as many people sadly get disowned and abused for coming out, but we really are just the same as everyone else. I wanted people to be able to relate with my own story and feel as if I’m giving a voice to theirs also. So yeah, I’d say it’s a mix of both, as I can write with more honesty and rawness when writing about my experiences but I know that a large amount of people from the LGBTQ community have an extremely hard time coming out, especially when the people around them aren’t supporting and encouraging. Which is something I also had to process on this journey.

Even with the new wave of out and proud queer artists we have in 2019, it still feels radical for a female artist to sing about being “touched by the woman I love” – is there any hesitation on your part when it comes to writing or singing these kinds of lyrics?
Honestly, I feel like we need more of it. It’s sexuality, it’s love, it’s normal. Straight artists can sing about practically anything because it’s normalised within society, however being a lesbian singer at this point in time I’m really seeing this chance to challenge and change how LGBTQ artists write about love and relationships. I want to make people think about it. I feel like a huge issue lesbians face is that our sexuality has been fetishised by the patriarchal media. One of the problems with this is that lesbian couples in intimately sexual scenes, songs or imagery are depicted as existing purely to satisfy the male gaze. This has historically been the case, too, even before any mainstream media. The importance of the lyric is to be crystal clear that our sexualities are real and beautiful, and we do not exist to please heterosexual men in return for a fetishised form of validity. A lot of the time in the media lesbians have been fetishised for the male gaze, but we are NOT here for the pleasing of men. That’s why that lyric exists, so that other LGBTQ people can relate to it.

How important do you think it is for young people to see and hear proud LGBTQ narratives like this in music?
It’s so important! I am so glad and proud to be contributing to it all. There’s enough love songs for straight people. Our community needs them, they need something to pull on their heartstrings, something they can feel and have for themselves. I only really started to become aware of queer music in the last two years, before I was so blinded by comphet (compulsory heterosexuality) and I felt as though I had no artist who had been through that. I’ve already had messages from younger people who have come to me for guidance on coming out and it’s all because of my music and nothing will ever make me prouder than that. Being able to directly help people through song is literally the best thing I’ve been able to do.

Do you think the mainstream world is ready for these conversations?
I mean, they better be. They’re past ready! There’s enough marginalisation in so many aspects of society and the world in general and it’s really time for difference and change to be focused upon. People like to think that LGBTQ folk are more recognised in the world, yet there are still so many hate crimes happening and so many people getting hurt because they’re loving who they want and expressing themselves through their gender. We may still be getting pushed down at times, but we are here and will be visible!

Who are some LGBTQ people that have inspired you?
There’s honestly so so many amazing LGBTQ artists and allies who have influenced me. Artists like ILOVEMAKONNEN, Hayley Kiyoko, MUNA, The 1975, Carlie Hanson, L Devine, Kehlani, Lil Nas X, FLETCHER, Girl in Red. I could go on! They’re all so sick at what they do and create.

What songs are dominating your playlists right now?
I’m really listening to a bit of everything right now, Doja Cat’s album has just dropped, and I’d love to be acknowledged by her… Saves The World by MUNA I think is the best queer album I have ever heard, it’s absolutely stunning. I’m seeing them soon and I’m so excited! I’m also really enjoying anything by Jessie Reyez, Sabrina Claudio and Kehlani. R&B is probably my favourite genre ever, and I’m so into it right now!

Do you have plans for an album or an EP in the near future?
I really want to make an R&B album as I don’t really know of any female artists who are lesbians and making R&B. That would be so sick. Hopefully I get the chance to do that. However, there may possibly be a video for Love Is Love too… I guess I’ll have to keep you posted! I’d also like to take a hot second to thank AZTX for their amazing skills and helping me create this song which means so much to me.