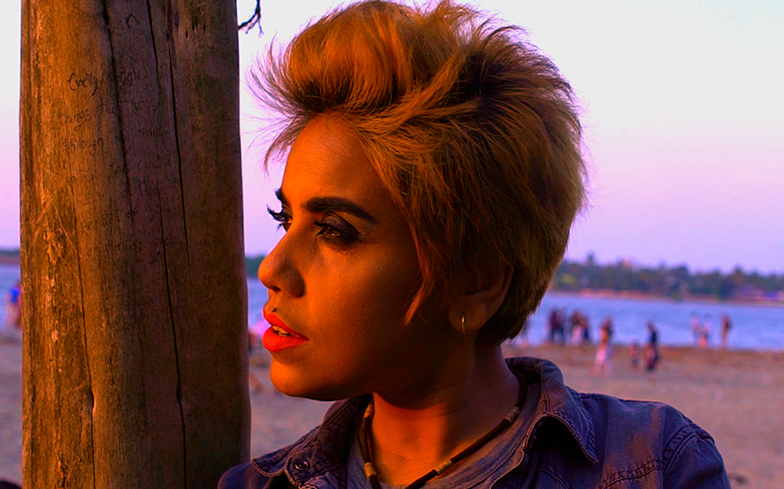 “When I came out I lost a big bunch of my friends, I lost a lot of gigs because they wanted me to look hot and sexy, and super feminine, but shit happens and we have to fight on.”

The first album by an LGBTQ artist to come out of India since the country legalised homosexuality is arriving this year via Pragya Pallavi, a musician and performer with an extensive range of influences. The lead single, released on Valentine’s Day this year, is an homage to lesbian love, and the video proudly celebrates it.

The album Queerism is out this May, and promises to cover the struggles of queer people, celebrate the decriminalisation of homosexuality in India, and millennial feminism, social justice, and global warming.

We spoke with Pragya this week about her experience in the industry as a gender-fluid lesbian, her relationship to her country’s cultural heritage, and her own coming out story.

Have you always been creative or musical?
Yes, very much! I learnt my first ghazal (a very beautiful form of Indian Music) from my grandmother when I was like two or three years old. She had a music institute and because of that I had the opportunity to learn Hindustani classical music from a young age. Besides music, I also learnt Kathak, a classical Indian form of dance, and painting. I’ve composed poems and songs since I was little. I was lucky to grow up in a creative environment where I was encouraged to express myself artistically.

Your list of influences are incredibly diverse, where do they come from? Did you grow up around music?
I grew up in a very musical family where I got to explore different forms of Indian music. But I was actually very much influenced by Western Music after the song My heart Will Go On was released. Celine Dion played a very important role in terms of me exploring more western music. I don’t like to just make the same thing again and again, I like versatility and I love making music in different genres. I never want to be put in a box in terms of my gender identity or my music. Music is such an ocean that even ten lifetimes won’t be sufficient to explore it!

LGBTQ rights in India have been quite limited until recently (obviously there’s still some barriers that need knocking down). How was your coming out experience, if you don’t mind sharing?
I think it was always inside me, but still it took me quite a while to realise I am gay. I dated a lot of guys, but I was not attracted to them, whenever we talked about something romantic I would feel uncomfortable. One of my ex-boyfriends actually told me that I might be a lesbian, and that actually made me think very seriously about the whole thing, about me not being attracted to guys, but to women. I always fantasised about being with women since I was a kid. I had a lot of crushes (including some of my teachers), but I was never sure. I found my first girlfriend online and we had a long distance relationship for about a year and then she came and visited me in India. She stayed with my family and they all thought that we were friends, but actually we were lovers! After she went back to the US, she wrote a letter to my papa, which mentioned our relationship. That was a crazy situation, we had a big fight, arguments. At one point I was almost ready to leave my house, but my papa started to accept me, followed by my mum and grandmom. I still remember one very important thing which my grandmom said – She said I love you and that matters the most. But, let me tell you something, when I came out I lost a big bunch of my friends, I lost a lot of gigs (because they wanted me to look hot and sexy, and super feminine) and I used to get a lot of crazy remarks because I was not dressing like a normal Indian girl. But shit happens and we have to fight on. I didn’t give up and here I am releasing Queerism, the first LGBTQ album from India and I feel really strong.

It’s an incredible thing for the LGBTQ community when a country finally changes a part of its law to accept us. How did you celebrate?
The first thing I did when this big news came was I said a big ‘yay’! Then my partner and I went to Bandra, where our friends were all meeting up for celebrating this big victory. We went to a gay party and it was really great!

With your song Lingering Wine, what inspired you and how did you pick it as the lead single?
I wanted to have a very kind of romantic sultry jazz/soul song on the album, because I really like songs by Amy Winehouse, Ella Fitzgerald, and Nina Simone. I wanted to create something in that style. So that’s how the composition came. The lyrics of the song were written by Deepa Vasudevan. I sent her my composition and gave her the idea. During that time she was actually on a wine tour and she decided to use a lot of wine-related metaphors to talk about love. After the decriminalisation of section 377, I think it was perfect to have a same-sex love song for the people to hear.

The video showcased same-sex love – was this important for you to do?
Yes, same sex love was super important. I am a lesbian, I am attracted to women and I wanted to express my feelings. The main line from the chorus is “Your kisses like Lingering Wine” and it seemed especially after getting our legal freedom that it wouldn’t be right to not show the love and passion of two women kissing. We have been told that we might have to change the kissing scene clip if we want it to be shown on Indian TV. So, right now we are thinking if we should challenge this or change the video clips. The Lingering Wine video is available online so everyone can watch it all over the world.

Across the album as a whole, how would you describe your sound?
Very diverse, a lot of political issues and subjects are being addressed in each song. Different genres and different styles.

There must be quite a lot of pride in being able to tell your story so truthfully and publicly, how does that feel?
It feels great, I hope that me being open will give other people the courage to do the same! That would be the real victory.

India has an incredibly rich history and culture, how has that influenced your songwriting?
A couple of the songs in the album are a fusion with western and Indian elements, but I don’t want to be limited to doing only that. I think the Indian traditions are inside me and probably influence my vocals and style, but not always explicitly. I am interested to see what comes out as i experiment with different musical forms.

Have you found yourself being seen as a role model to other artists in similar positions to yourself?
I don’t know yet, but I hope that I could be one day!

Do you feel that after this release, more artists will feel comfortable to come forward and release music of their own?
I think that queer people are very influential consumers of music but there is not enough music by queer artists about being queer. We don’t have many queer anthems coming from the queer community itself. But lately we are starting to see many mainstream artists coming out and I hope that there would be a big queer musical renaissance in the near future, and more queer indie musicians would also get some big platforms to showcase their talent to the world.

Do you have a messages for our readers that maybe be reading this with dreams of their own?
Have courage because nothing in this world is easy. It is very important to hold on to your dreams and try until you achieve it. Even if you feel different from the people around you, do not stop! You are unique! Just be yourself, do what you like and spread love and happiness around.

What’s next for you this year?
I am really looking forward to being recognised as an artist and a composer, to do a lot of shows in India and around the world, and have the opportunity to collaborate in many new projects. I am thinking about doing a Folk World Music project where I would visit many small villages in India and collaborate with local artists in regional languages. After that I’d like to do another English album, on which I would love to collaborate with more established musical artists from other countries.