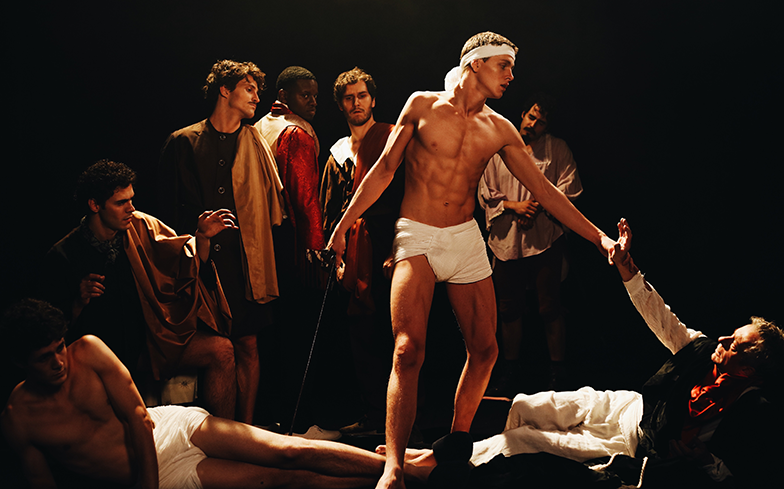 The gay drama – which has just been released in UK cinemas – tells the story of Jim (Harris Dickinson), a teenage boy who escapes his rural town in Essex and unintentionally ends up exploring the world of male prostitution in a stylised, dreamy depiction of Soho.

“In a way, it’s a love letter to a Soho that doesn’t really exist anymore,” McLean explains. “It’s like trying to recall the Soho of my youth, but also discovering, coming into central London from the suburbs, like-minded people, sexuality and art.”

We caught up with the acclaimed British director and discussed the inspiration behind the divisive queer drama, why he didn’t want the film to be a typical coming out story, and how he knew rising star Harris Dickinson was perfect for the role of Jim.

Can you tell me how the story of Postcards from London came about?
I wanted to do something about Soho. I really didn’t want it to be a gritty, realist British film, do you know what I mean? I wanted it to be like a memory of Soho, almost. And I wanted it to be really quite stylised, quite dreamy. It was more like the character’s memory of what Soho was, or what it used to be. Of course, it never really looked like that, but I just wanted it to be a dreamscape of Soho. I also didn’t want it to be set in a specific time period, so you didn’t quite know where you were, but you knew you were in the Soho of this imagination.

Watching it, I had absolutely no clue when it was set.
When we did the costumes, I spoke to my designer Kate, and we decided that the boys should all wear different stuff from different eras. So you’d have the 50s suit, Harris dressed like a skinhead from the 70s, just to try and make it seem non-specific, I guess. At the start, I did think it was going to be another gritty British film, but after five minutes it completely switches genres, so I had no idea what to expect next.
That’s good. A lot of people have said that. I think the people who enjoyed it and bought into it have kind of liked that mixture of styles and how it’s slightly surreal and quite quirky. It’s supposed to be fun, and it’s supposed to be engaging in a fun way. That was the intention.

If I had to describe the film in one word, it would be ‘unpredictable’.
I like that. I think that’s kind of cool actually. Obviously, we made the decision to shoot the whole thing in a studio, so that we could avoid that gritty realism that we were just talking about. Apart from the opening scene where he walks through the alley, which we did shoot in Soho, everything was shot in the studio.

What was it about Soho specifically that made you want to set the film there?
I’m from the suburbs of West London, and when I first came out and first discovered my sexuality, I came into Soho into my late teens, early 20s. It was a really wonderful place, and I kind of miss that part of Soho which has been gentrified, been cleaned up, and I just wanted to capture something of the adventure of the old Soho. Seedy, but then it was slightly dangerous, diverse and slightly welcoming. In a way, it’s a love letter to a Soho that doesn’t really exist anymore. There are pockets of it. It’s like trying to recall the Soho of my youth, but also discovering coming into central London from the suburbs and discovering like-minded people, your sexuality, art… It’s about all those things, and Jim is wide open to different experiences.

What was it like working with Harris?
He’s wonderful. He got the script through his agent, and he sent us a tape which we really liked. We saw a lot of actors, but he just really popped out. We called him back and we read with him again, I read with him. He completely embraced the role, he embraced the fun of it, the quirkiness of it. I can’t imagine anyone else playing Jim, I really can’t. He’s just really fun to work with, he’s a really sweet guy and we had a ball. The camera loves him. I can’t imagine anyone else playing Jim, but then again, I can’t imagine anyone else playing Frankie in Beach Rats either. He completely transforms himself. We were speaking the other day, about the different roles he’s played. He first played a young gay man struggling with his sexuality, and then in this, his sexuality is a given. It wasn’t really mentioned, and it was about discovering other things. I’m really happy that we found him.

There’s been a lot of debate about queer roles going to straight actors. What are your thoughts?
At the end of the day, I think it’s really important that there’s diversity in terms of who gets the roles, and I think it’s important to have diversity behind the camera as well. Also, you have to kind of go with, ‘Who’s the best person for the job?’ We made this film almost two years ago, and Harris was 19 I think. I had no idea what his sexuality was, but it was very clear that he was perfect for this part. Having said that, we need it to be much more diverse behind the camera. Making movies is a rather white, straight, middle-class profession. As a gay man myself, it’s very important to have diversity and to encourage gay actors, but it’s a tough debate. The film is about male prostitution, art and the human form. How did you get the idea to combine all of those elements?
It stands out as a film, which is great. I wanted it to be Soho, I wanted it to be dreamy, but I wanted it to be a discovery of art. I had to figure out how to get those ideas in there, and then I found out about Stendahl syndrome, which is actually a real condition where people become quite emotional around paintings and they imagine themselves in it. It was a perfect way to introduce the work of Caravaggio and play around with that, and have fun with the art as well. There’s a history of art and queer artists in Soho and I just wanted to tap into that, and pay tribute to it.

What kind of feedback have you had from people who’ve watched the film?
It’s been really good. Some people maybe want more of a story, but I don’t think it’s a plot driven movie. It’s much more of an ideas driven movie. I’ve been all over the place in Europe and the States with different queer festivals, and the audiences really liked it. They were quite engaged with it because a lot of the Q&A’s were quite full, people stay behind to debate and listen to what I have to say. Whether they like it or not, that’s a good sign that people are intrigued by it at least.

What do you hope audiences take away from the film?
I hope it’s optimistic, but I just hope whatever your sexuality, you can come to a big city like London and meet a diverse crowd and you can have fun and discover yourself. When Jim walks down the alley at the end of it, he says he wants to make his own art. It’s an optimistic ending, and you think the kid is going to be okay, he’s going to do well. I also want people to have fun with it, that is the intention.

Postcards from London is in cinemas now and on DVD and VOD in December. Watch the trailer below.