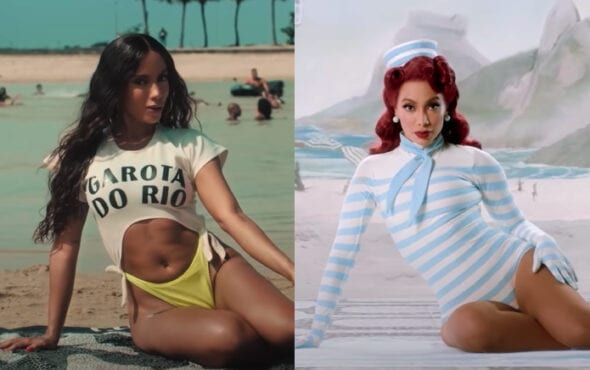 Pop songstress Anitta has released an epic summer anthem with her new single, Girl From Rio.

In the sizzling new record, the star opens up about growing up in the beautiful and diverse city of Rio De Janeiro.

Featuring clever verses and an updated melody of the classic song, The Girl From Ipanema, the track will leave music listeners yearning for a holiday in the seaside city.

Anitta also dropped an accompanying video for the record that showcases the beauty of Rio and the people that live there.

At the start of the visual, we see the songstress dancing in front of a vintage beach backdrop while wearing a 40’s era swimsuit.

The scene swiftly changes to an actual beach in Rio as she sings the lyrics, “Let me tell you ’bout a different Rio. The one I’m from, but not the one that you know.”

As the visual continues, we are treated to shots of both vintage and modern-day Anitta enjoying a glorious beach day. From its colourful backdrops to the diverse beachgoers, the visual effortlessly brings the song to life.

Taking to Instagram, the songstress gave fans an inside scoop into the creation of the single and the overarching message behind it.

“‘GIRL FROM RIO’ is about the Rio de Janeiro under my perspective, the Rio I saw and lived in. This is a very personal song,” she said.

“I talk a little bit about everything, my family, the place where I came from, where I grew up, the people I saw and see every day, it’s my point of view about women in general and the beauty that I see in them.”

Anitta goes on to praise the team behind the record that includes pop stars Raye and Gale and producers StargateMusic.

Watch the full video for Girl From Rio below and listen to the song here.