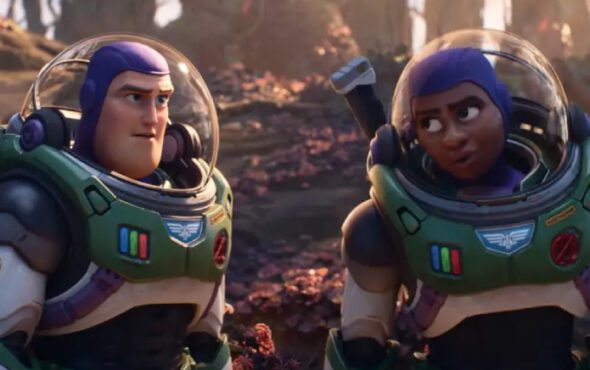 Pixar’s new animated film Lightyear has been banned from cinemas in multiple countries over its LGBTQ+ content.

Back in 2020, the highly-anticipated film was announced during the annual Disney Investor Day event.

The film, which stars Chris Evans as Buzz Lightyear, is set to explore the origin story of the beloved action figure.

The new project is also expected to feature an array of new characters, including a queer space cadet named Hawthorne (Uzo Aduba).

But unlike previous Pixar projects, Lightyear is expected to feature the studio’s first-ever same-sex kiss.

The brief moment, which was initially cut but then later restored, is set to take place between Aduba’s character and her partner.

However, due to the film’s LGBTQ+ inclusive moment, Lightyear’s upcoming release has been banned in numerous countries.

According to Reuters, Saudi Arabia, United Arab Emirates, Egypt, Indonesia, Malaysia, and Lebanon are just some of the 14 territories that have blocked the film.

“The office confirms that all films screened in cinemas across the country are subject to follow-up and evaluation before the date of screening to the public to ensure the safety of the circulated content according to the appropriate age classification,” they said in an additional tweet.

The office confirms that all films screened in cinemas across the country are subject to follow-up and evaluation before the date of screening to the public, to ensure the safety of the circulated content according to the appropriate age classification.

This isn’t the first time that Disney has refused to cut an LGBTQ+ scene or a queer character from its movies.

Back in March, the company declined to cut “LGBTQ+ references” from Doctor Strange in the Multiverse of Madness.

“It’s just her talking about her moms, because she has two moms,” he told The Guardian. “And being in the Middle East, it’s very tough to pass something like this.”

Marvel’s 2021 blockbuster Eternals was also banned from the Gulf regions due to Disney refusing to make “edits” requested by the local cinema chains.