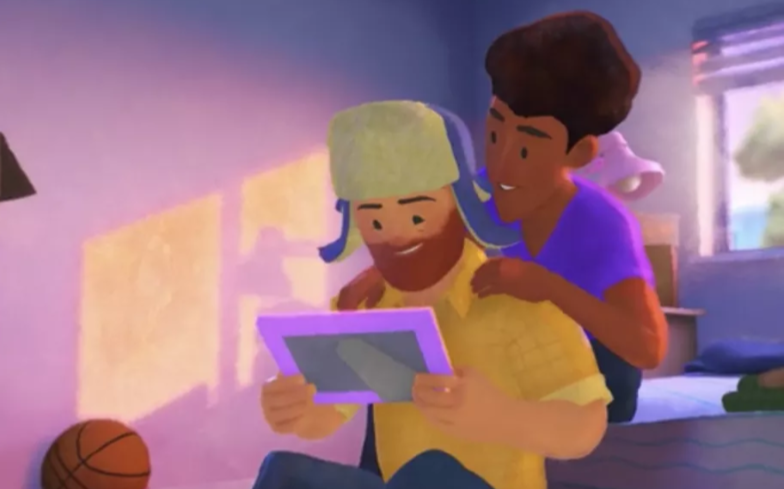 The heartwarming short features a man struggling with coming out to his parents.

Although Pixar has provided some LGBTQ representation over the years, the characters have generally been in small roles, like the lesbian parents from Finding Dory or Toy Story 4 to Officer Specter in their latest film Onward. But this time, an LGBTQ character takes the centre stage, even if it’s just a short film.

The film, which is part of Pixar’s new SparkShorts, sees Greg, who is in a same-sex relationship, moving house with his partner, Manuel. When his parents come to help the couple, Greg attempts to hide a framed photograph of himself with Manuel, as his parents don’t know about his sexuality.

During the short, Greg ends up swapping bodies with his dog, due to magic from a sparkly cat and dog, and attempts to hide the photograph from his parents. Obviously, with his dog now in his body, his human self is busy chasing squirrels and barking.

And over the course of the short, Greg learns that maybe he doesn’t have to hide who he really is.

The short was written by Steven Clay Hunter and produced by Max Sachar, and is billed as being based on a “true story” or at least parts of it.

You can watch the adorable trailer below, or by following this link. And the full short is now available on the Disney+ streaming service.

Disney + faced some controversy earlier this year, when it was announced that the Love, Simon spin-off TV series, Love, Victor, was being pulled because of “adult” themes.

According to Variety, sources explained that “Disney felt many issues explored on the show, including alcohol use and sexual exploration, would not fit in with the family-friendly content on Disney Plus.”

The series is now set to launch on Hulu in June, coinciding with Pride Month. Hulu seems confident in the show, as it has reportedly already commissioned a writers’ room to explore ideas for a possible second season.

And recently speaking to Gay Times Magazine, the show’s star, Michael Cimino, says that the character was inspired by his gay cousin. “I asked him about his story, and how it affected him, and we kind of went on a deep dive into what affected him in what ways, and so in the end we kind of based Victor on my cousin because I wanted to represent his struggle,” Michael says.