Pissy Pussy: Meet the NYC designer who is a walking talking piece of art 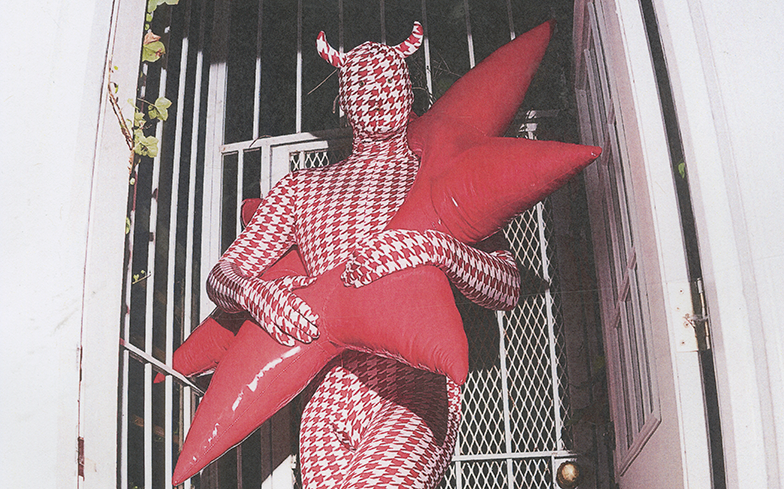 The first thing that one notices about Pissy Pussy is… EVERYTHING. The New York-based designer is the antithesis of understatement, towering high above crowds in sky-scraping shoes, headpieces and alien couture.

Pissy was birthed in the NYC club scene by Robert Reed, the brains behind the brand, following in the footsteps of the long lineage of queer royalty to emerge from the city’s electric nightlife. Reed is a self-identified ‘outlaw in the fashion scene’, refusing to play by any style rulebook and always defying easy categorisation.

For one, Pissy Pussy never shows their face due to Reed’s hatred of make-up, and it is this choice to be covered that makes the creation so uncanny. The absence of such a key human feature helps to take Pussy from human experiment to living art piece; a walking, talking, exhibit. Pissy Pussy’s 2019 has been a busy one, having released their first collection for Spring 2019 at NYFW and launched a (now sold out) online collection for Black Friday.

How would you define who Pissy Pussy is?
Pissy Pussy is a faceless, towering, living art piece. Removing the face allows for my audience to absorb my creations from head to toe. I find faces to be distracting (especially in fashion). It’s made me kind of an outlaw in the fashion scene because faces are the money maker for large publications, but I find it overdone.

Would anyone have been able to sense this fashion persona brewing when you were growing up?
I was always a very creative kid. I wasn’t really into fashion: my art form of choice was film and I was totally consumed by it from a young age. When I was 10 I would be watching Ingmar Bergman, Lars von Trier and Akira Kurosawa films and I think this has benefitted me tremendously in my artistic ventures in life. I spent thousands of hours filling my brain with some of history’s greatest films, and I’m able to translate such artistic integrity into my work.

You’ve said before that Barbra Streisand has been one of your greatest influences. What was it about her style that captures you so much?
Barbra was a true fashion pioneer in the 60’s and 70’s, doing things most people wouldn’t dream of; from her Ann Roth designed lingerie in The Owl And The Pussycat, to her iconic fashion mishap at the 1969 Oscars when her Arnold Scaasi sequin two-piece ended up being completely see-through in the light of the camera flash. Besides the fact that she is the most perfect human being, her fashion continues to inspire my current work. Sometimes when I’m having trouble creating new work, I’ll spend hours looking through Barbra photo books that I have to give me inspiration.

Who is someone inspiring you right now?
As you can guess from my obsession with Barbra, I’m a very old soul. I don’t follow much current pop culture, music or art. If I were to choose someone inspiring me currently, I would have to say my boyfriend Bogdan Stanga. He’s photographed 90% of my work. He met me at a point in my life when Pissy was kind of at a standstill. He reeled me in, directed my focus to editorial work over nightlife, and has created a whole new vision for Pissy. He is definitely a huge reason why Pissy is what Pissy is today. His work and vision always inspire me to continue creating, we always bounce ideas off of each other and make such wonderful work together.

Googling your name produces an array of, shall we say, interesting, results: where did it come from?
My main goal in life is to pop up on Google before porn [laughs]. When I was first going out in nightlife, I knew I needed to find a name (because no one goes by their real name, c’mon). It came to me one night when I remembered that my sister’s childhood nickname (given to her by my mom) was Pissy, derived from Missy. So it was a little joke. I stole that name and Pussy just came naturally after it. I knew it was vulgar, rhymed and would stick in people’s head.

What is your creative process like? Do you begin with one piece in mind and build out around that, or does the concept reveal itself all at once?
My creative process is pretty simple. I usually get these visions in my head that I can see so clearly, but I can’t draw so I keep it in my head. I usually start with the headpiece or large element of the look to make sure I can execute it before continuing with the rest. Sometimes something amazing comes from this process, and sometimes something not so great comes out of it. It’s all a learning process for me.

Your fans had their first proper chance to own one of your creations in a Black Friday collection, most of which is now completely sold out. Will you continue to design and release ready to wear pieces?
Yes! My Black Friday collection was something new for me. Previously I only really sold masks. I knew my following wanted bodysuits (which has kind of become a staple of mine), matching gloves and masks. I didn’t have much time and did it on a whim, but I thought if my following wants it, I should give it a whirl. I was astounded when everything sold out almost immediately, it was really nice to know people really wanted to wear things that I made. I never have any set plans about what I do in the future, but I’d like to do something similar again.

Do you plan on releasing more collections following your first for Spring 2019 at NYFW?
Like I said, I don’t really plan anything out. My 2019 NYFW collection was a random opportunity I got. I was given a space to present my work with all fees waived. I only had three weeks, myself and maybe $3,000 to complete 14 head to toe looks and find enough models to walk in my show. In the future, I would like to do more of a living exhibition for a fashion week presentation, but I need to find the right sponsors and such. But hopefully, soon I can bring a new wearable art collection to the table.

You’ve collaborated with Drag Race alum Milk a number of times: what have these experiences been like and how did they influence your art?
I love Milk! They were one of the first people to really want to wear my things. They pulled a few archive pieces from me and I’ve also been able to make them a few custom pieces. They are the perfect build for my work: sometimes I’ll make something for myself and I’ll be like, wow, this would look really good on Milk. That’s kind of how they ended up modelling for my new collection, I just knew they would look killer in the new pieces!

Last year, former GAY TIMES cover star Jodie Harsh also featured one of your costumes in her music video, Tuesday, a silver, faceless bodysuit complete with the shape of her iconic wig. What is it about the drag community that resonates so well with your artistic vision?
I loved working on that project for Jodie! They saw my original disco look from my shoot ‘Pissy Pool Party’ and thought it would be cool to create a disco ball silhouette of themselves. It was a very challenging look to make, but such an awesome outcome. I think the drag community is really drawn to my work because we are in a time where we question what drag is, whether it’s gender, fashion, or makeup. I don’t like to consider myself a drag queen (just an artist works for me), but I do think drag queens can find inspiration in my work to help break barriers in the drag world.

Having already worked with the likes of Sasha Velour and David LaChapelle, who do you dream of dressing?
I’ve had the opportunity to work for some really awesome people, but my number one person to dress would be Grace Jones! Her fashion is as timeless as her music is. I think Grace Jones in Pissy Pussy would be psychotic!

How has your relationship with fashion changed since it became your career and not just for exhibition on the NYC club scene?
I’ve honestly never been really into fashion. If you threw famous designer names at me I’d probably be lost. I think my distance from the fashion world allows me to create more original pieces. But I would say, going from making club looks to having my work photographed by David LaChapelle in a few years feels amazing. I don’t really go out anymore because I simply don’t feel like it. But I’m glad my fashion sense was born in the NYC club scene.

Can you offer any advice to young queer creatives, especially those whose work challenges convention?
Work hard, focus, don’t drink (too much), don’t do drugs, find what makes you happy, sleep a lot, mind your own business, and work towards building a brand.

Finally, what’s next for Pissy Pussy?
Ugh! How do I answer this?! I’ve done a lot of stuff for other people recently, so I’m hoping to make some seriously outrageous looks for myself in the coming months… then from there, world domination (duh).