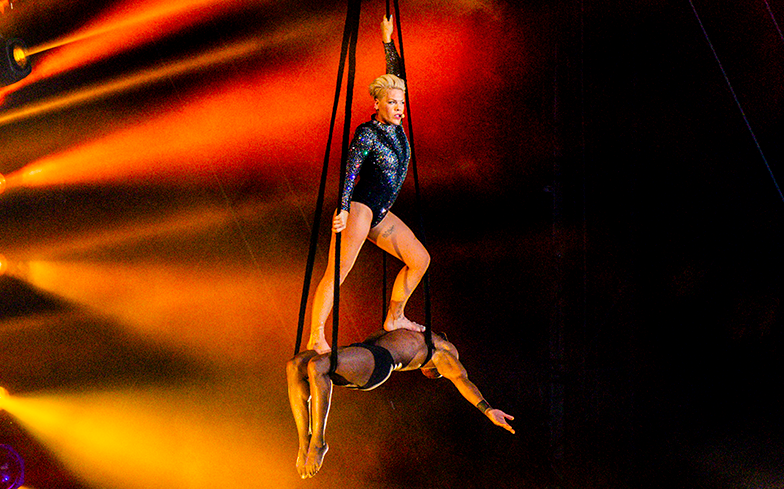 Pink just delivered one of the biggest pop spectacles in Wembley Stadium’s history.

To a crowd of 70,000 plus, the American singer-songwriter slash acrobat churned out anthem after anthem whilst providing fans with flawless vocals, impeccably choreographed dance routines and breathtaking cirque-de-soleil-esque numbers. She started the show tied to a massive chandelier as she performed her signature hit, the 2001 dance-pop anthem and party staple, Get the Party Started – to enormous roars from the audience, before recreating the incredible video for Beautiful Trauma (Channing Tatum wasn’t in attendance though, sorry!)

Pink then slowed it down for performances of her first UK solo number one single, Just Like a Pill and her relatable Max Martin-produced power ballad, Who Knew. Trust us when we say there were a few tears in the audience for the latter, which, to this day, still resonates with anyone who has lost a love, a friend or a family member. Although Pink boasts several amazing ballads in her discography – Stop Falling, Eventually, I Don’t Believe You, to name a few – it’s this song that will stand the test of time, perhaps out of any of her hits. One of the most exciting parts of the whole show, however, occurred when Pink performed a medley of Funhouse and No Doubt’s feminist rock anthem, Just a Girl. With this number, Pink once again showed that her raspy tone and soaring vocals would be perfect for a fully-fledged rock record. We saw hints of it with her third era, Try This (especially with Waiting for Love), but after this performance, we’re even more eager for a Janis Joplin-esque studio album (watch her performance of Me & Bobby McGee here, it’ll blow your fucking mind).

Later, after performing Hustle from her latest album Hurts 2B Human, Pink stunned audiences when she sang – and we say this without exaggeration – perfectly for two hardcore routines for her underrated dance track Secrets and one of the biggest hits in her catalogue, Try. At one point, she was literally standing on her dancer suspended in the air without support – do you now see why we called her the “most spectacular performer in the industry” and compared her to cirque-de-soleil? Pink is putting her life on the line every single time she’s on stage, and she looks like she’s having the time of her life while she’s doing it, which can’t be said for many of her peers who find it impossible to crack a smile.

Throughout Pink’s career, she’s always been political; fighting for gender equality, same-sex marriage and even blasting then-president George Bush in 2006 on the acclaimed track, Dear Mr President (who else has the guts to do that?), so it came as no surprise that she would be taking a stance at barbaric legislation in United States – and the world – on tour. Before she hit the stage to perform What About Us, Pink played an powerful clip featuring LGBTQ trailblazers such as Ellen DeGeneres, Adam Rippon and Laverne Cox, while her voiceover passionately said: “It boggles my mind that we’re spending time, energy and money trying to ban love. I don’t want there to be gay marriage, I just want there to be happy marriage.” The arena was full of queer people, and this was the moment that garnered the most applause.

The streak of ballads then continued with shoulda-been-a-single For Now, new single 90 Days (with special guest star Wrabel), latest single Walk Me Home and what we hope is a cover single on iTunes and streaming services ASAP, Time After Time by Cyndi Lauper. When Adele reminisced on seeing Pink during her M!ssundaztood Tour, she said the experience was “feeling like I was in a wind tunnel, her voice just hitting me, it was incredible” – which is exactly what it feels like when Pink sits down for an acoustic set. She’s almost 20 years into her career and her voice has never sounded better. Also, we want to silence the haters and point out that Pink is not a one trick pony, she doesn’t just fly around stadiums (which is fucking impressive), she can dance and she can sing the shit out of anything. Yes, we stan! Towards the end of her set, Pink reminded us of the inspirational speech she gave her eight-year-old daughter at the 2017 VMAs. In the speech, she recalled when Willow was targeted by a fellow child for having boy-ish locks, which led to Pink making a Powerpoint presentation of iconic androgynous performers throughout history, such as David Bowie, Freddie Mercury, Annie Lennox and Elton John. “When people make fun of me, do you see me growing my hair?” said Pink. “‘No, mama.’ Do you see me changing my body? ‘No mama.’ Do you see me selling out arenas all over the world? ‘Yes, mama.’” This paved the way for the star’s Billboard Hot 100 number single and underdog anthem, Raise Your Glass, which had all 70,000 plus of Wembley up on their feet (we were there, we saw).

Pink closed the show with three huge uptempo numbers, Can We Pretend – one of the new singles from her eighth studio album – Blow Me (One Last Kiss) and So What, which included her catapulting around the stadium on a harness, before leaving the evening on Glitter in the Air. She didn’t provide us with the iconic routine from the 2010 Grammy Awards, instead opting to wear a white t-shirt and jeans, but it was a perfect conclusion to a perfect night. We’ve rambled for a long time, because like we said, “we stan!” but it was truly one of the best concerts we’ve ever attended. Pink may have flown under the radar over the past two decades in comparison to her 90s-debuting peers, but she’s outlasted pretty much all of them when it comes to longevity. She just sold out two nights at Wembley Stadium, hello? Obviously, we give Pink’s Beautiful Trauma Tour five out of five, because she is – without-a-doubt – the most charismatic and exciting performer in the industry. Raise your fucking glass.