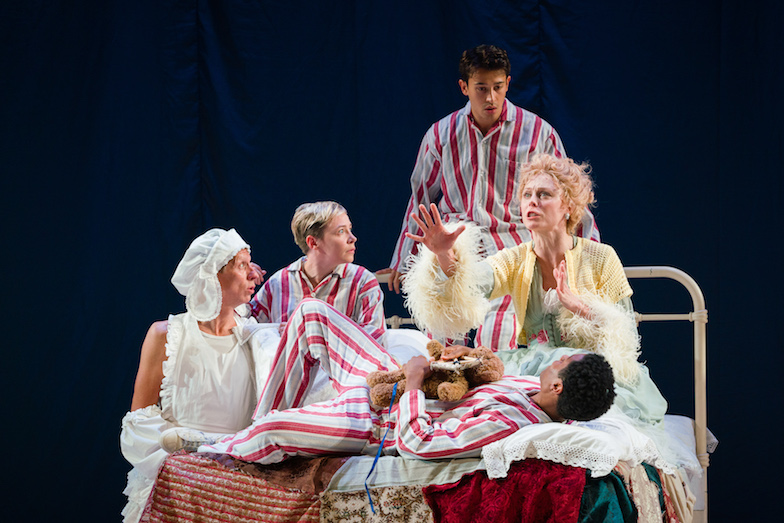 This revival of the National Theatre’s 2016 co-production with the Bristol Old Vic has opened at the brand new Troubadour Theatre in White City, directed by Sally Cookson.

2019 seems to be a good year for new theatres opening in London; continuing that trend is the brand-new Troubadour Theatre in White City. Home to two performance spaces, Peter Pan is playing in the larger, 1,200 capacity theatre; vast, boxy, and featuring exposed rigging, it more closely resembles a miniature arena than a traditional theatre space.

Although this production is large in scale, at times it felt a little bit swallowed up by the cavernous space in which its events unfold. Given the many attempts to turn this into an immersive experience – including cast members flying above the audience and characters entering the stage from the aisles – at times we felt surprisingly disengaged. It’s a shame, as we could imagine this working much better in the National Theatre, but at the Troubadour it felt like certain scenes struggled a bit.

That’s not to say that it doesn’t have anything going for it. Most of the acting is reasonably strong; Daisy Maywood was particularly enjoyable as Wendy, while Kelly Price excelled as the malevolent Hook. The live band was proficient; they had their own performance area, but would often potter down onto the stage and join in the action. Some of the production elements really worked well, including the swirling planets during the flying segments and the masterful puppetry for the crocodile.

We did find the pitching of the play a bit odd – it’s clearly aimed at children, or a more family-friendly demographic at least; there’s really not much here for grown ups to get their teeth into. With that considered, the run time in excess of two and a half hours would likely mean a lot of younger members of the audience may have lost interest by the interval. The pacing felt sluggish, the songs weren’t particularly memorable and there wasn’t as much humour as we’d have expected.

It’s a shame as this production of Peter Pan has its fair share of impressive moments – some scenes are very visually striking, and there are a handful of commendable performances. We just felt a bit detached – the play doesn’t feel a natural fit for this sort of space. It could have done with being a little pacier, and with a couple of catchier songs and a handful of witty jokes we’d have really enjoyed ourselves.