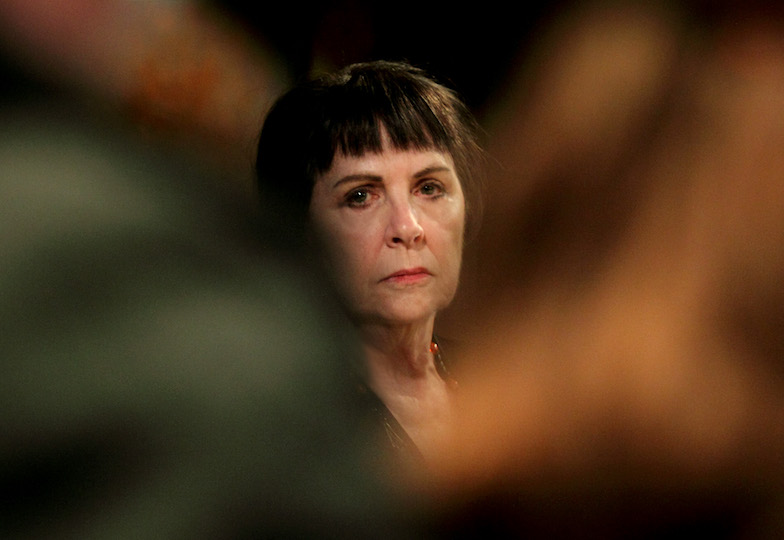 Directed by Richard Eyre, the Menier Chocolate Factory hosts the first London revival of David Hare’s one-act play since its 1986 debut at the National Theatre.

Set in Leningrad in 1956, The Bay at Nice tells the story of Valentina Nrovka (Penelope Wilton), an artist who has been invited to the Hermitage to verify the authenticity of a Matisse painting. Following a series of inconclusive tests, she has been asked to look at the canvas by an unnamed curator (Martin Hutson); as a former pupil of the great artist, it is hoped that Valentina will be able to recognise something in the artwork which the scientists missed.

Accompanying her on the visit to the Hermitage is her daughter Sophia (Ophilia Lovibond), also a painter, who sees this as an opportune moment to seek her mother’s support, both financially and politically. Over the course of the play we are introduced to Peter (David Rintoul), the older man that Sophia is planning to leave her husband for.

We weren’t completely sold on the text itself. It’s a play of ideas; very little happens, beyond drawn-out conversations which stretch beyond art and authenticity to cover loyalty, love, marriage and the search for happiness and meaning in one’s life. Yet it all feels a bit contrived – the conversations don’t always flow naturally, while the staging seems quite artificial. There’s a lot of pacing around and various characters enter and exit but none of this really adds anything tangible. The ever-present canvas – shrouded in cloth – is a nice touch, especially when we come tantalisingly close to seeing it, but otherwise there was no real need for such a grandiose and opulent stage.

Thankfully the show is redeemed with some absolutely wonderful acting. Each actor turned in an impressive performance, although we did feel that the play was written for the character of Valentina and the other three were more supporting roles. Penelope Wilton was on fine form in the lead role, however, displaying a superb versatility; from withering put-downs to knowing one-liners, her performance was, for the most part, a textbook exercise in restraint. She captured the quiet melancholy of her role perfectly.

Unfortunately some excellent performances can’t completely make up for the script’s shortcomings; The Bay at Nice is sadly a bit of an underwhelming play. It has its moments, and there are some very entertaining lines, but if it weren’t for Penelope Wilton’s impressive star turn we’d find it difficult to recommend.