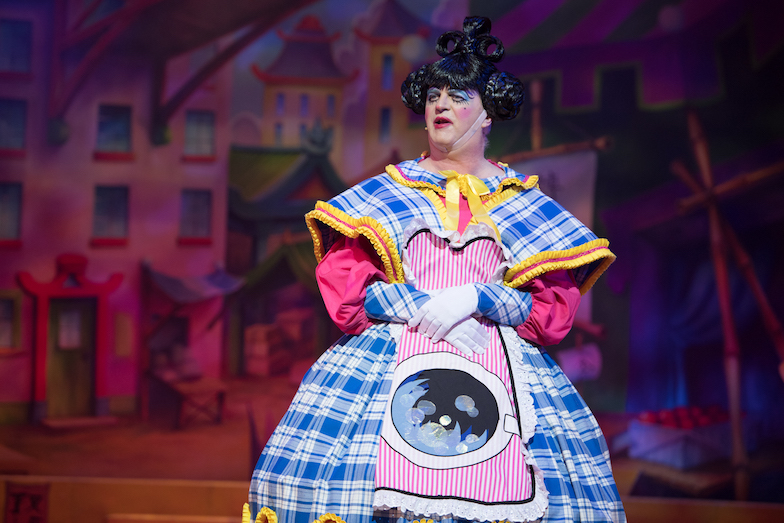 The Have I Got News For You comedian turns in a humorous and endearing performance in an enjoyable rendition of Aladdin at the New Wimbledon Theatre.

With former Theatre Royal Stratford East artistic director Kerry Michael at the helm, this new rendition of Aladdin brings together some big name talent – comedian Paul Merton, singer Lee Ryan and magician Pete Firman – in the impressive space that is the New Wimbledon Theatre. It focuses on the story of Widow Twankey (Merton) and her sons Aladdin (Ryan) and Wishee Washee (Firman) and features an updated soundtrack drawn from contemporary pop songs and recent musicals.

For the most part it’s a conventional, family-friendly pantomime. All the usual traditions are present and correct and there’s plenty here to appeal to audiences of all ages. There are also projection elements dotted throughout the performance, facilitated with the provision of 3D glasses – perhaps a bit overused, but the effect is engaging.

Paul Merton undoubtedly steals the show in his stage panto debut. Appearing impressively bewigged, with a variety of amusingly over-the-top costumes, he makes plenty of jokes suitable for all the family – and some very much just for a mature audience. In his trademark style he drops some wonderfully deadpan one-liners throughout and also draws huge laughs for his moments of improvisation.

Pete Firman entertains throughout, too – he has a charming rapport with audience members both young and not-so-young and enjoys some genuinely very funny, playful exchanges with Merton. Linda John-Pierre is the unsung hero of the show as the Empress; she has a dynamic stage presence and delivers an epic opening number. Lauren Chia turns in a solid performance as Princess Jasmine but is perhaps under-utilised.

Lee Ryan is unfortunately the weak link here. While the magic carpet scene impresses, his is an otherwise underwhelming performance – his acting and dancing certainly leave something to be desired. Even his singing disappoints slightly – it’s solid enough, but he’s not really afforded an opportunity to showcase his vocal prowess.

It doesn’t detract from an otherwise highly entertaining show, however. Yes, it’s predictable, silly, and over-the-top, but – as Paul Merton rightly points out – those groaning at the puns knew what they were getting themselves in for when they bought the tickets. It’s an enjoyable new production featuring some big-name talent and numerous laugh-out-loud moments. What more could you want from a panto?