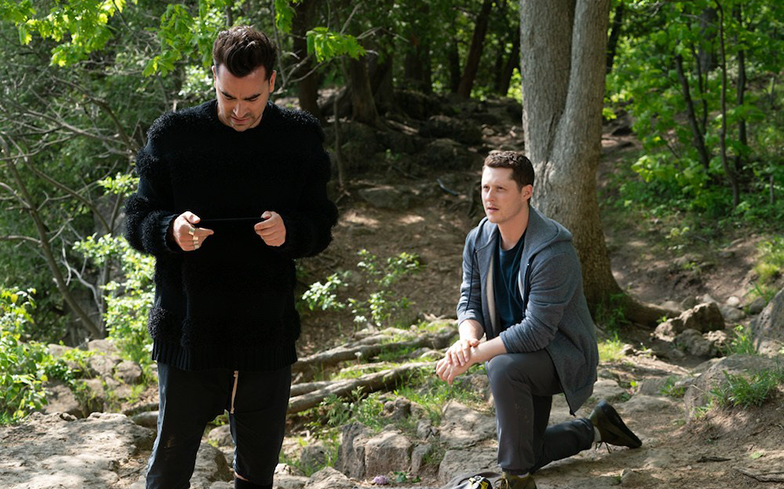 “Here he is. The love of my life, standing in front of me. And this just felt like the perfect place to ask you to marry me.”

David and Patrick’s relationship was taken to the next level in the latest episode of Schitt’s Creek.

In the 13th episode of the fifth season, The Hike, the two characters embarked on a romantic trek in the woods (to David’s dismay) which led to Patrick suffering a foot-related injury.

After carrying him for most of their journey, David discovered four engagement rings in a small package in their picnic bag, and then turned around to find Patrick on one knee, ready to propose.

“So I used to come on this hike a lot when I first moved here and I was developing feelings for this guy I had just gotten into business with,” Patrick told him. “And I didn’t know what to do about it.

“I didn’t know if that guy had the same feelings or if I’d ever be able to muster up the courage to let him know how I felt. And now, here he is. The love of my life, standing in front of me. And this just felt like the perfect place to ask you to marry me.”

David then jokingly asked Patrick if the rings were 24-carat, before confirming: “It’s a yes. It’s a yes. I love you.”

It was, without-a-doubt, one of the most emotional/adorable moments from the series and it left us in tears tbh. Watch below.

Last month, it was revealed that Schitt’s Creek’s upcoming sixth season will be its last.

“We are so grateful to have been given the time and creative freedom to tell this story in its totality, concluding with a final chapter that we have envisioned from the very beginning,” Dan and Eugene wrote in a statement.

The series stars Eugene Levy, Dan Levy, Annie Murphy and Emmy Award winner Catherine O’Hara as the Rose family, who lose their fortune and have to take refuge in a town they bought as a joke, Schitt’s Creek.