Pass Over is a powerful and compelling social commentary – review 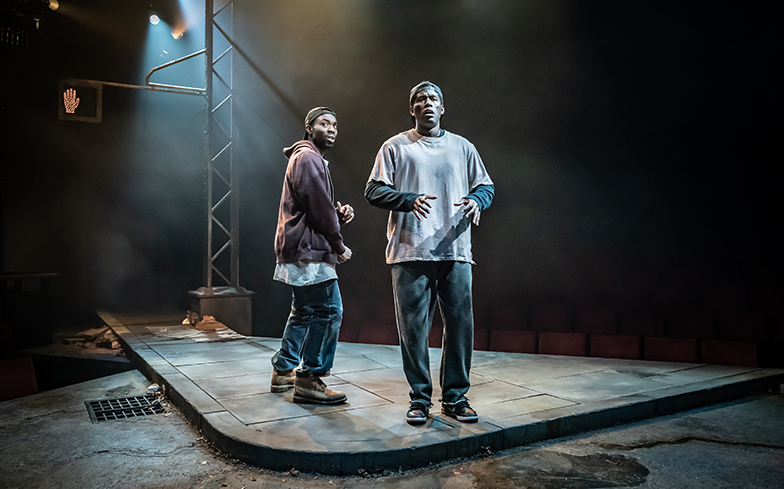 Evidently inspired by Samuel Beckett, Pass Over focuses on the lives of two young men who are stood on a street corner, waiting for something. Unlike the classic tale which sees Vladimir and Estragon waiting for Godot, however, we are introduced to Moses (Paapa Essiedu) and Kitch (Gershwyn Eustache Jnr) who are, presumably, waiting to die. The odds are stacked against them – they are two homeless black men in a town whose white police force is institutionally racist and violent. They spend their days plotting an escape, in the knowledge that no-one in their situation gets out.

Over the course of the play they encounter two white men – the improbably wholesome all-American Mister and the police officer Ossifer – both played by Alexander Eliot. There’s an uncomfortable sense of foreboding with these interactions; Mister may put on a pretence of not wanting to cause offence, but his dog-whistle language and partial-redaction of racial slurs do little to conceal his underlying bigotry. Ossifer doesn’t make any attempt to conceal his racism – the overtness of his delivery makes for a very tense and uneasy atmosphere.

While it may be a provocative piece of theatre which is at times uncomfortable to watch, Pass Over manages to be a powerful and compelling social commentary. Central to its success is the chemistry between the central pair – they deliver electrifying performances, full of energy and humour yet managing the rapid tonal shifts that the text demands. It’s an intelligent play which doesn’t offer any easy answers, instead posing challenging questions, leaving its audience trying to figure out what the solutions should be.

Pass Over is an important and powerful new play exploring relevant issues. It’s not the most straightforward or entertaining show in town, but it’s very much worth checking out – it says more in 80 minutes than many plays manage in two or three hours. In this day and age we really need art that challenges the way things have been done and isn’t afraid to ask the big questions – Pass Over does exactly that, with some brilliant acting performances too.