Party is as rollicking good a ride as ever – review 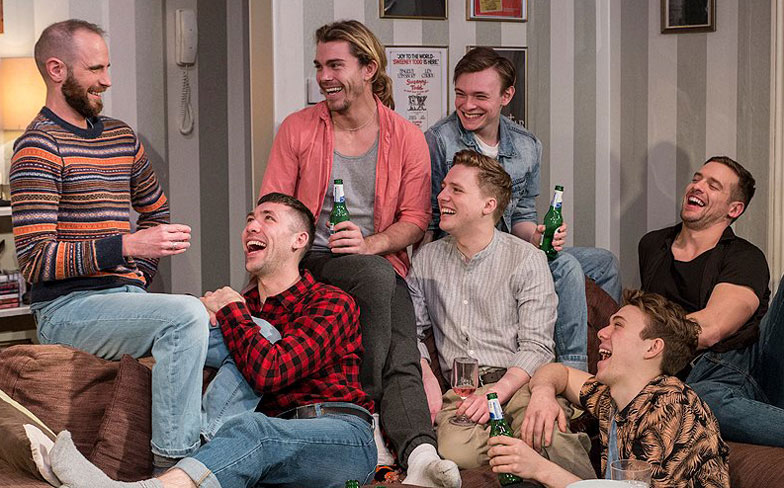 Above The Stag / Party

A rollicking good a ride as ever – with as many gags coming thick and fast, and as much flesh on display, as you could possibly hope for.

Written as response to the endless slew of depressing gay plays that dominated the 80s, Party is, as the title suggests, all about fun. Seven gay men assemble for a night of light-hearted frolics that centre around a game of Fact or Fantasy – basically a souped-up version of Truth or Dare with additional bluffing options and the chance to flip the dares onto other participants.

There isn’t a great deal of plot beyond that, but the absence of heavier narrative is here a strength, rather than a weakness, and hanging out with these boys is an unusually immersive and eminently pleasurable way to spend a couple of hours.

Here’s a show that, after a delightfully meta interval cliffhanger, stops beating around the bush and just happily flaunts its meat and two veg with gay abandon. We won’t reveal here exactly who gets their kit off, or to what precise extent – we’ll just say that you’re unlikely to be disappointed. And even when things do turn full-frontal, it’s always with a sense of playfulness that never comes across as seedy or gratuitous.

The cast is uniformly excellent. Host of the party Kevin is played by Sam Goodchild, who appeared in the 2016 production, but as a different character. Sam makes the most of this alternate casting and gives us a studied characterisation that show off his talents to even greater effect.

Brian the dancer is brought to lively life by the endlessly energetic and pleasingly perky Jamie Firth. Stag regular Lucas Livesy is as entertaining as ever – none more so than when having whipped cream licked off his nipples. New to the show is Freddie Hogan as James – a strong and quiet type – a performance as impressive as his rippling abs.

Other new additions to this cast are Daniel Forrester as Peter and James Farley as Andy – the two younger members of the group. Daniel gives us cool and confident, while James is more of a nervous ingénue – initially, at least… both of them are an utter delight to witness.

Stealing the show, however, with a tour-de-force piece of characterful creativity, is Ben Kavanagh as Ray – the only priest at the party, and one who knows how to let his hair down at that. Ben wields wit like a master swordsman, bitching and leering with astonishing comic precision, and also providing surprisingly heartfelt testimony when presented with a probing truth challenge. Superb.

Party’s deliriously good fun. A stunningly detailed and naturalistic set by Andrew Beckett adds to the feeling that one is actually attending this saucy shindig, and lively direction from Gene David Kirk ensures that we are constantly captivated. This titillating triumph is likely to sell out quickly, so ensure that you reserve your invitation to the best party in town ASAP.