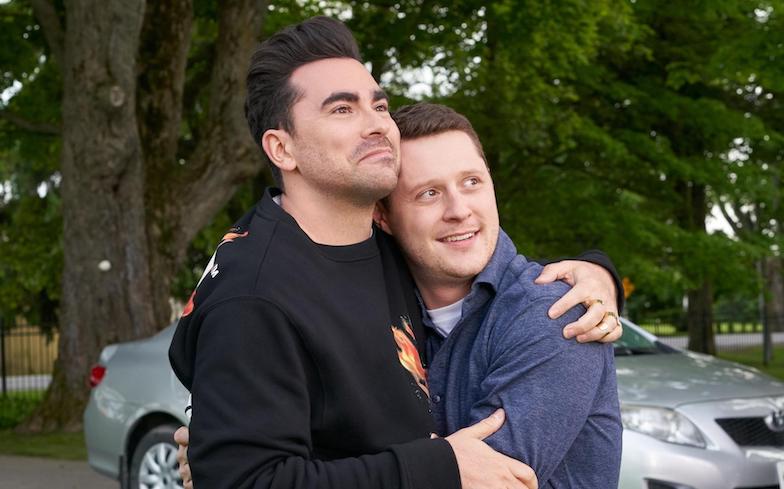 “The work you have all done on Schitt’s Creek has encouraged us greatly and given us hope about the future for our kids.”

A short clip from the show’s documentary, Best Wishes, Warmest Regards: A Schitt’s Creek Farewell, has gone viral on social media thanks to a powerful and heartwarming letter from over 1,800 grateful mothers of LGBTQ children.

After discussing the incredible impact the comedy series has had on the LGBTQ community, Noah Reid, who plays Patrick Brewer – the love interest of Dan Levy’s character David Rose – read aloud to his fellow cast members:

“Dear Mr Dan Levy, cast, crew and writers of Schitt’s Creek. We belong to a large, private Facebook group called ‘Serendipity Doo-Dah for Moms, Home of the Momma Bears. We have more than 5000 moms in the group, and many of us are working to make the world a kinder, safer, more loving place for all LGBTQ people to live.

“More than 1,800 of us are signing this letter because we wanted to say thank you for the LGBTQ characters, relationships and storylines that you have included in Schitt’s Creek. Your commitment to represent, love and tolerance in your show is so important to families like ours. Your willingness to explore, inform and educate about LGBTQ people and their relationships in an entertaining but respectful and positive manner sets a tone that is often missing.

“You have created new ways for queer viewers to see themselves represented and in its own way, that is just as important as the battles we are still fighting. Therefore, the work you have all done on Schitt’s Creek has encouraged us greatly and given us hope about the future for our kids. We sincerely believe that shows like Schitt’s Creek will serve as a catalyst to help change the world into a kinder, safer, more loving place for all LGBTQ people to live, and because of that, we will remain forever grateful.

“You’ve made a lot of momma bears happy, and as a result, you have a whole bunch of fans forever, with sincere gratitude and respect.”

“I am very proud of the fact that this show sort of, shines like a positive light out there into people’s’ homes,” responded Dan. “The fact that people are also experiencing something deeper through the show is… you can’t ask for anything better.”

In the documentary, Levy revealed that the iconic wine scene from the first season – in which David explains his fluid sexuality to Stevie – has inspired Schitt’s Creek fans to come out as LGBTQ and live more authentic lives.

“I got a tweet from a guy who said that he used the wine metaphor to come out to his family,” he said. “And I thought, that’s a pretty amazing thing, that’s something you don’t think about when you are sitting down to write a television show.

“It just would have never occurred to me that it’s better to do a show where there… is no homophobia, than to do a show that speaks to it and talks about how it does, but like, what a paradigm shift.”

It even inspired Levy’s co-star Emily Hampshire to come out as pansexual too.

“I looked at Dan, and I was like ‘What am I?’ I like a person, and I genuinely don’t care what the equipment is as long as we’re happy,” she told us. “And he was like ‘Do you watch the show? You’re pan!’ Cut to five years later, definitely pan!”

The Schitt’s Creek finale aired earlier this week to praise from fans and critics. We recently rounded up the five best moments from the episode, which you can view here. Spoilers, obviously.

Related: Dan Levy reveals if the season six finale is really the end of Schitt’s Creek.