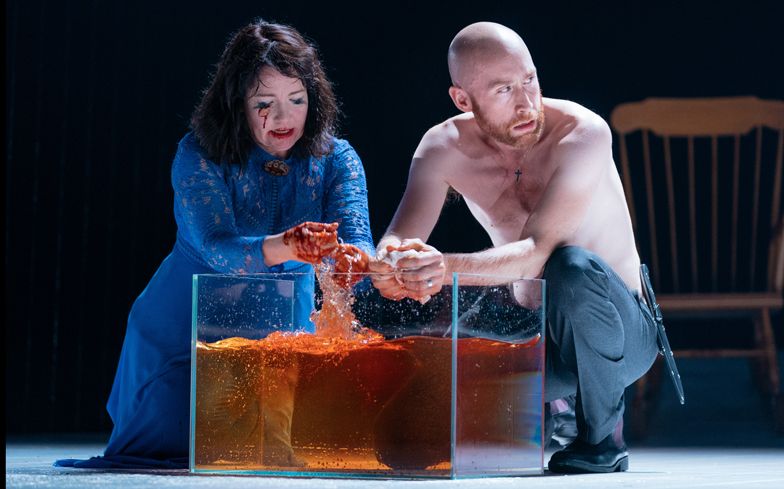 Jude Christian directs this performance of two classic plays at the Lyric Theatre in Hammersmith.

It’s certainly not a bad concept for a show. Essentially, OthelloMacbeth presents the stories as two sides of the same coin, both portraying dominant male characters and exploring the violence they inflict on their victims. Cue two back-to-back performances by the same company in the same space.

However, it’s flawed from the start. We were hoping this would be some sort of intelligent crossover, but instead we are presented with two heavily-cut renditions of really quite weighty, epic plays presented one after the other. The rare moments of splicing never work in any smart or intelligent way. If they were interwoven throughout they may have been more effective, but as they’re few and far between they just seem to jar with the main action.

As both plays have been so heavily cut it becomes difficult at times to even understand the fundamentals of the story. If we weren’t already familiar with both texts we would really have struggled to follow what was going on. Many key scenes, including Iago’s famous soliloquies, have been axed entirely, while many of the opportunities to develop Iago’s and Othello’s relationship have gone too, which makes the twists and turns of the plot quite baffling.

The acting isn’t up to scratch in places, too – we’re used to a higher standard on a stage as professional as this – and some of the lines are lost due to poor diction, which is unforgivable given how many lines have already been cut. The set is also confusing – the Othello section is just a giant metal screen, notable only for its percussive qualities. The Macbeth act offers marginally more to look at, but it’s not very imaginatively used.

We’re really struggling to find things to recommend about OthelloMacbeth. It’s a nice concept for sure, but the execution is flawed from the start. The set is uninspired, the direction unclear, and the text has been cut so much that opportunities for development have been axed, leading to one-dimensional characters delivering two plays that don’t really make much sense at all.