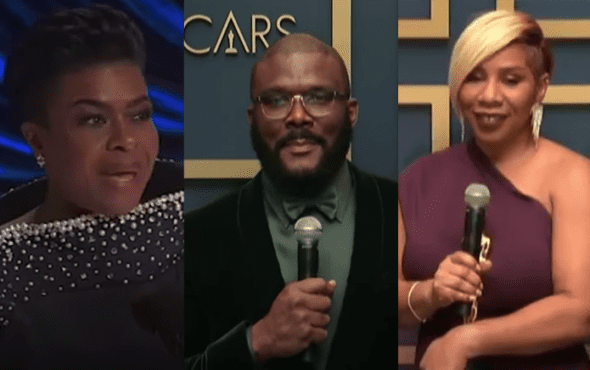 On Sunday night, April 25, the Academy Awards were in full swing and historic moments were made.

During the speeches, Wilson and Neal gave moving statements acknowledging the barriers of the industry and called for the field to become more accessible to others.

“I stand here, as Jamika and I break this glass ceiling, with so much excitement for the future,” she told the small, in-person audience – and the millions tuning in virtually.

“Because I can picture Black trans women standing up here, and Asian sisters, and our Latina sisters and Indigenous women,” Wilson proudly said on stage.

“And I know that one day it won’t be unusual or groundbreaking – it will just be normal.”
Neal, who shared the incredible moment with the other two women, reflected on her own journey to becoming an Oscar-winner.

“I was raised by my grandfather James Holland. He was an original Tuskegee Airmen, he represented the US in the first Pan Am games, he went to Argentina he met [Eva ‘Evita’ Perón], he graduated from Northwestern University at a time that they did not allow Blacks to stay on campus, so he stayed at the YMCA.

“And after all of his accomplishments, he went back to his hometown in hopes of becoming a teacher. But they did not hire Blacks in the school system,” she told viewers.

“So I wanted to say thank you to our ancestors who put the work in, were denied, but never gave up.”

"I can picture Black trans women standing up here.

And our Latina sisters.

And I know that one day it won't be unusual or groundbreaking.

It will just be normal."

Congrats to Mia Neal and Jamika Wilson! The two just became the first Black women to win the Oscar® for Best Makeup & Hairstyling for their work on MA RAINEY’S BLACK BOTTOM, alongside Sergio Lopez-Rivera. pic.twitter.com/RTelg2gm2n

Praise for the makeup and hairstyling team quickly followed the announcement of the win as users online celebrated the cultural milestone.

"I know that one day it won’t be unusual or groundbreaking, it will just be normal,” for Black women, trans women, Latinas, to be claiming Oscars, says Mia Neal.

American actor Typer Perry was recognised for his philanthropic efforts and awarded the Jean Hersholt Humanitarian Award at yesterday’s ceremony.

Perry is known for his generous activism and support of the Black and LGBTQ+ community.

The actor has previous supported grieving Black families who were victims of police brutality and created an LGBTQ+ youth shelter at his studio.

“And in this time, and with all of the internet and social media and algorithms and everything that wants us to think a certain way, the 24-hour news cycle, it is my hope that all of us will teach our kids – just refuse hate. Don’t hate anybody.

“I refuse to hate someone because they are Asian. I would hope that we would refuse hate.”

“So anyone who wants to meet me in the middle, to refuse hate, to refuse blanket judgment, and to help lift someone’s feet off the ground, this one is for you, too.”

However, not everyone was pleased with the actor’s middle-ground approach, particularly its support of the police.

Police officers are not an oppressed group. No one “hates” the police because of undue prejudice. It’s because they engage in state-sanctioned violence against all of the groups Tyler Perry said we shouldn’t hate! #Oscars

You can watch Perry’s speech here or below.