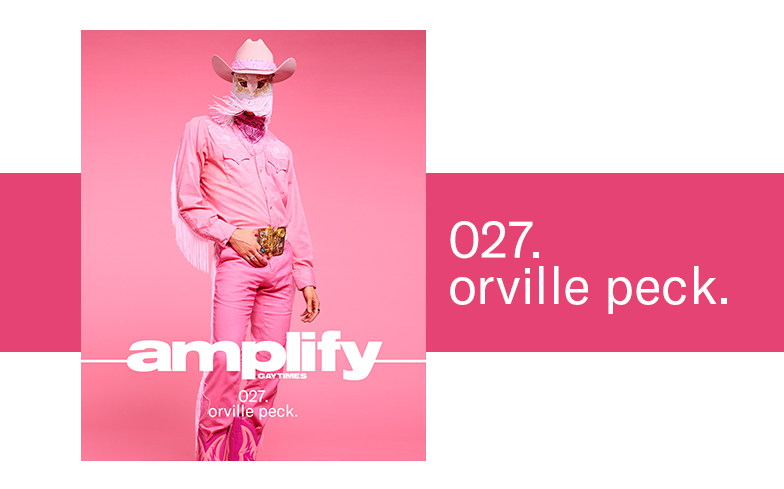 “That’s a common misconception about me, it’s not a character,” says new artist Orville Peck after we ask about the origins of his flamboyant, leather-fringed persona.

“I’m a cowboy and an outlaw. It’s not separate from who I am, it is who I am.” The masked crooner’s ‘character’ has been a focal discussion point throughout his career, and after speaking to him for just a couple minutes, you can tell it’s the aspect of the interview process he’d like to avoid. “It’s not me hiding my identity, it’s just the aesthetic I display as an artist,” he clarifies. “It’s people’s inability to accept an art-form, and I don’t know when, we as people, became so suspicious of that. I’m just trying to present what I do with some flair and some artistry.” Since his professional music industry debut earlier this year, the pseudonymous country star and queer cowboy has kept his face and birth name secret, which inevitably led to speculation from fans and media outlets as to his true identity. But really, Orville’s identity is the least interesting part about him. His debut album proves that.

Pony – a 12-track collection of Southern rock anthems about love and loss that harken back to a time of outlaw stars from the American South – explores his life as a lonesome cowboy; a lonesome cowboy who just so-happens to never take off his mask and identifies as a gay man. On Winds Change, Orville sings, “Left my mind in the Salt Lake City, met a lot of men who would call me pretty,” while on Big Sky he reminisces about his past male relationships. “Fell in love with a rider, dirt king, black crown, six months on a knucklehead hog, I like him best when he’s not around,” he proclaims in his Elvis-styled tone. It’s rare to hear a Lone Ranger-esque country star croon about his same-sex encounters, so his true identity – like we said – isn’t the most interesting part. “I’ve never felt like I’ve had to come out as a gay artist,” he says, acknowledging Pony’s overtly queer overtones. “I’ve never felt like that was a point of contention for me. Those songs, those experiences happened to me from the perspective of a gay man. It’s a huge part of what I do and it’s a huge part of who I am, but it isn’t an agenda for me to be visible because I’m a gay man. It’s my agenda to be as sincere as possible.” It’s easy to call Orville a groundbreaking figure in country music for his unabashed queerness because it’s not often seen in the genre, but he insists he’s just continuing the legacy of past pro-queer (or just queer) artists such as Willie Nelson and Patrick Haggerty from Lavender Country. (The band gained notoriety during the 70s for their self-titled debut album which included a song titled Cryin’ these Cocksucking Tears, which called for the end of straight men because of their “common disease”.) So, queerness in country has always been there, it’s just, for some reason, been overlooked.

Enter Orville Peck. In a time where anti-queer vitriol is being spouted from the mouths of the world’s most powerful officials, the star aims to be role model for “people that didn’t feel like they didn’t have a place or a voice”. Country is often linked to the Republican party, but according to Orville, the image and ethos of a cowboy is “essentially someone who is an outlaw, marginalised and living on the outskirts” who doesn’t know their place in society. The opposite of a Republican, basically. “Whether you wear a cowboy hat or not, it’s irrelevant, the imagery of a cowboy is very powerful to people because we are living in times right now that are very divisive,” he says. “I think we feel a bit powerless at times. Marginalised people, especially people of colour and queer people, we connect with cowboy imagery because it is innately rebellious, innately powerful. It’s an iconic image that shows it’s okay to be on the outside.” According to Orville, the “unfair” stigma attached to ‘homophobic’ country listeners is down to the genre being seen as “conservative”. However, he does blame the select few country fans for spoiling the genre for everyone else. “It’s sad, because country is super gay. The drama. The storytelling. There’s so many incredible figures in country that gay dudes would die for, because it’s pageantry, almost,” he says. “With country music, there’s a long legacy of camp-ness, storytelling and flamboyance with costumes, wigs and rhinestones. Just look at Dolly Parton, she’s practically a drag queen. Originally country music was very rebellious, it’s always been intrinsically outlaw-ish. In the 60s, Nelson was smoking weed and wearing shirts that said ‘Fuck Homophobia’.” He rightfully adds that queer voices haven’t been visible for a long time in any genre (up until recently). “Freddie Mercury was a queer icon and a queer legend, but even to some extent he had to be very protective of talking about who he was,” he tells us. “Country music is treated unfairly in a way, everyone thinks it should hurry up and adapt, but there’s not a huge abundance of gay voices in the world of rap and hip-hop either.”

You can hear Orville’s love for country in his deadpan Southern voice, and his desire to be respectful towards the genre. While he’s not doing this to change the way people think about country music, he acknowledges that a large aspect of the genre is “straight white men singing about trucks,” and he wants people to realise the genre has a “colourful, rich history”. He cites Lil Nas X as a recent queer artist to have successfully subverted expectations. As we write this, the 20-year-old rapper’s country and rap hybrid debut single Old Town Road has just logged a historic 18 consecutive weeks at number one on the Billboard Hot 100, becoming the longest-running chart-topper in history. While the song was in the pole position, Lil Nas X came out as gay, making him the first artist to do so whilst having a number one record.

Then there’s Kacey Musgraves. Although the Grammy winner doesn’t identify as queer, she’s become an outspoken activist for the LGBTQ community with Pride-inspired country anthems such as Rainbow, the video of which depicted a teenage boy coming to terms with his gender identity. Mainstream country artists are slowly voicing their support for queer rights, and country listeners are on board, which Orville aims to bring awareness to. “Fans of country music are far more open and hungry for diversity, and they get a bad reputation,” he says. “I think it’s on the brink of being something really different and new, and I think over the next few years we’re going to see a lot more people making country music that people wouldn’t think are the kind of people to do so. Yes, I’m maybe a new voice within this sphere for people, but everything I do comes out of respect for artists that have been around for a long time and have already paved the way.”

Yes, it’s easy to argue that Lil Nas X wouldn’t have had this much success if he was out beforehand, but it’s still number one, so it proves Orville’s point that country listeners are craving diverse representation. This is also evident at Orville’s live performances. There, you’ll see a diverse range of people from drag queens, to trans people, goths, punk rockers, everything in the “subversive realm”. But it’s not just the LGBTQ community. Although non-country fans would assume his aesthetic and songwriting is off-putting to those who love country bops about vehicles, like he mentioned earlier, he has a passionate following of straight white men who take no issue with his sexuality. “I also have frat boys, mainstream couples, people in their 80s, and it’s hard not to know about my sexuality through my lyrics,” he laughs. “I think when they find out, it doesn’t seem to be a problem for them. I think in 2019, it makes sense to me.”