On Bear Ridge an abstract exploration of loss – review 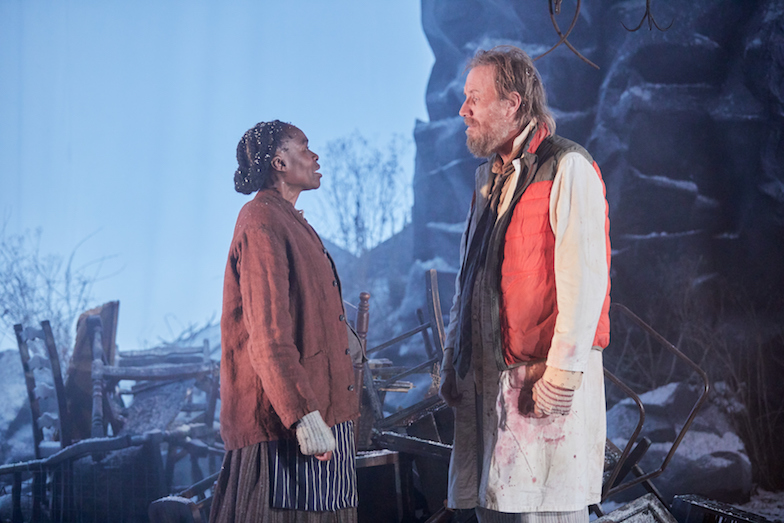 The events of On Bear Ridge unfold in a former butchers shop in a remote part of Wales – well, we assume that, although the exact location is never specified. Set in a post-apocalyptic world where jet planes roar overhead, and their customers and stock have mysteriously disappeared, John Daniel (Rhys Ifans) and Noni (Rakie Ayola) defiantly drink their remaining whiskey and reminisce about the good times. Their slaughterman Ifan William (Sion Daniel Young) is also staying with them; the play tells the story of the day the trio are visited by mysterious outsider The Captain (Jason Hughes).

It’s an abstract new text, exploring themes of loss, memory and identity. Reminiscent of Samuel Beckett’s works, it offers a bleak depiction of a dystopian world, with its characters just getting on with their lives in an absurd set of circumstances. While the tone may not lend itself naturally to humour, there are some amusing tragicomic scenes – from John Daniel’s elaborate argument about the need to preserve his trousers, to the trio’s continued observation of the ritual of drinking tea together long after they’ve run out of their supply.

There are some moments of genuine warmth which are a joy to behold. The central couple work well together, with some affectionate interplay and an evident understanding of each other’s foibles. Rhys Ifans comes into his own when relishing the absurdity of John Daniels’ monologues, portraying the character’s anger and confusion. Rakie Ayola brings a real tenderness to proceedings, with Noni’s never-ending embodiment of empathy even in situations which are difficult to comprehend.

As much as there are many elements of this production we enjoyed – it’s full of intriguing thoughts, there are a handful of great lines and there are some strong acting performances here, too – we left the theatre a bit baffled as to what we were supposed to be taking away. Was it all a metaphor for economic and social decline? Was it a commentary on left-behind rural communities? Was it all just some bizarre memory or figment of one of the character’s imaginations? There’s enough in On Bear Ridge to make it a reasonably enjoyable performance, but it left rather more unanswered questions than we’d have liked.