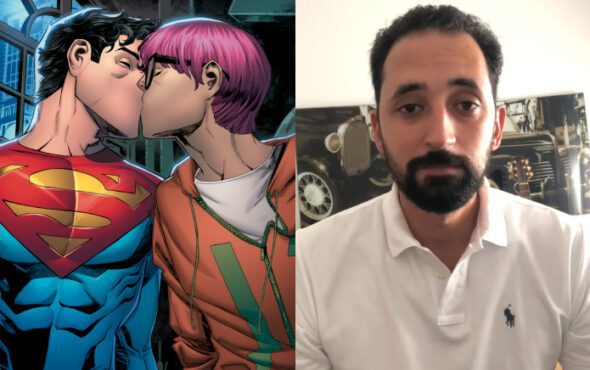 A Brazilian pro-volleyball team has cut one of its players after they made anti-LGBTQ+ comments about DC’s bisexual Superman.

Earlier this week, Mauricio Souza uploaded the viral photo of Jon Kent kissing his boyfriend alongside a biphobic caption.

Soon after he uploaded the post, many of Mauricio’s peers condemned his comments including his gay Olympic teammate Douglas Souza.

Taking to social media, Douglas expressed his disappointment in the situation while praising DC’s inclusion.

“If an image like that worries you, I’m sorry, but I have something new for your fragile heterosexuality.

“There will be a kiss, yes. Thank you, DC [Comics], for thinking of representing all of us, not just a part.”

After the immense backlash, Mauricio uploaded a backhanded “apology” in which he said he was “defending” his beliefs.

“I came here to apologize to everyone who was offended by my opinion, for standing up for what I believe,” he wrote.

“It was not my intention. Just as you defend what you believe, I also have the right to defend what I believe.”

Since his initial post, the Minas Tênis Clube has parted ways with the controversial player after complaints were made from LGBTQ+ activists, fans and sponsors.

The coach of the Brazilian national team, Renan dal Zotto, opened up about the decision to let him go in a statement to Brasil de Fato.

“I was disappointed. This type of conduct by Mauricio is unacceptable and I am radically against any kind of prejudice, homophobia, racism,” he said.

“When it comes to the Brazilian team, there is no room for homophobic professionals. Above all I need to have a team and I can’t have this kind of controversy in the group.”

Aside from Mauricio’s homophobic remarks, the majority of comic book fans have praised the inclusion of a bisexual Superman.

Due to demand, every single issue of our #Superman Son of Kal-El is being reprinted, and @DCComics have reported unprecedented orders for issue #5.
Out November 16. Art by @johntimmsart & @hificolor.https://t.co/LA1uW25339 pic.twitter.com/6Ck7FerSZZ