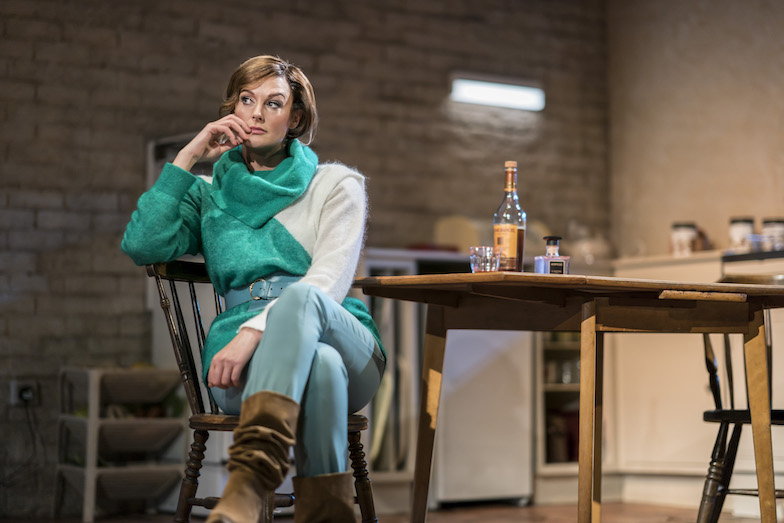 Top Girls starts promisingly enough. Opening with the iconic – and delightfully quirky – dinner party scene, it sees de facto lead Marlene (Katherine Kingsley) celebrating her success about her ascension to managing director of the Top Girls recruitment agency. Interestingly, her embodiment of Thatcherite feminism feels just as much of a historical throwback as her dinner party guests, including the amusing Pope Joan (Amanda Lawrence), which presumably wasn’t the case when the play made its debut.

The opening scene regularly delights, with a number of intelligent and witty one-liners sitting within a discussion surrounding women’s place in society throughout the ages, in relation to career ambitions, children, class and politics. However, we found the rest of this production a little underwhelming. Over the subsequent three scenes, we were given more of an insight into Marlene’s back story, gradually filling in the blanks in the non-linear narrative.

Our main issue was that everything felt a bit inconclusive. Both act one and act two finished quite suddenly; we were hoping for some sort of full-circle moment, especially at the play’s conclusion, but it never materialised. It really didn’t help that the first act was substantially longer than the second – it set us up to expect more was to come after the interval.

We also didn’t feel that the flow of the play worked as effectively as it should have – there were moments that felt very stilted indeed. Although we could see the intention of the overlapping interruptions, there were several occasions where the actors didn’t quite settle into the swing of the text’s rhythms, making the overlaps feel more accidental than intentional.

Having said that, it’s a play with a number of redeeming features. Notably it all looks very impressive – Ian MacNeil’s set design is strong throughout. Although we weren’t sure how well the back yard scene would read from all corners of the auditorium, it felt suitably claustrophobic, adding to the dramatic tension of the text. It also offered a perfect contrast to the vast expanse of the Top Girls recruitment agency which followed.

Overall we felt this was a disappointing revival of Caryl Churchill’s play. It certainly had its moments – we enjoyed the opening dinner party scene, there’s an interesting political discussion towards the conclusion, and the show as a whole had a number of thought-provoking moments – but we felt it could and should have gone further. While Top Girls may well be interesting, intelligent and occasionally very funny, it all just felt slightly underwhelming.