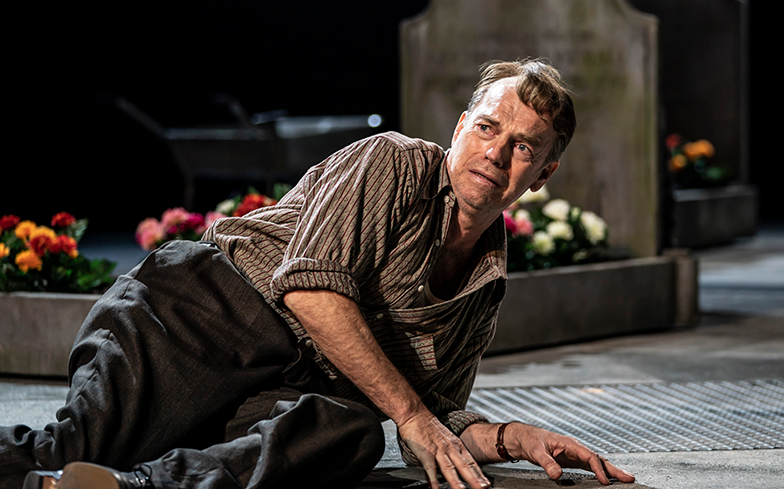 We really wanted to enjoy The Visit. On paper it sounds like it has the ingredients of something really quite special – Tony Kushner (Angels in America) adapting a revenge epic, starring Hugo Weaving and Lesley Manville. What’s not to love?

The Visit’s story is set in the town of Slurry in New York state, during the time of the post-war depression. The manufacturing industry is collapsing, the factories are closing and people in town are struggling to get by. Their one hope for salvation is that a wealthy former resident, the billionnaire Claire Zachanassian (Lesley Manville), is returning to the town for a visit – word has it that she may invest some of her fortune to help her fellow citizens during this time of hardship. She does make a generous offer, but it comes with serious strings attached.

There are some individually strong elements – the production values are sky high and Lesley Manville in the lead role is truly exceptional. She plays the villain brilliantly, with cutting one-liners and a commanding stage presence. However, such is the strength of her performance that everything around her simply doesn’t compare. Even a competent rendition of her childhood sweetheart Alfred Ill by Hugo Weaving pales in comparison. Whenever Manville is not on the stage, it all feels a bit empty.

For pretty much the entire show we found ourselves wondering why it was so long. Sure, act one has quite an exciting and dramatic conclusion, but does it justify the 75-minute slow burn it takes to get there? Absolutely not. We assumed that each act would get progressively shorter, but an improbably brief middle meant that the final act rambled on for longer than we’d have liked. When it reached its inevitable conclusion, it all just seemed a bit anticlimactic and underwhelming.

We also felt that the more interesting story – the “what happens next” and how the townsfolk will feel about it – never gets told. We don’t want to share any spoilers, but from the end of act one it’s evident that a certain event is almost inevitably going to happen. The play spends the best part of four hours building up to the moment of truth, and when we reach the “will they/won’t they” conclusion, it all ends rather abruptly.

Suffice to say we were really quite disappointed with The Visit. There’s some seriously big-name talented attached to this production but it never adds up to the sum of its parts. It’s a slick show which looks and sounds very nice, and Lesley Manville delivers an impressive performance, but overall it’s a bloated and underwhelming play. With a lot of editing there could be a decent two-hour show buried in here somewhere, but it will need a lot of retooling to find it.