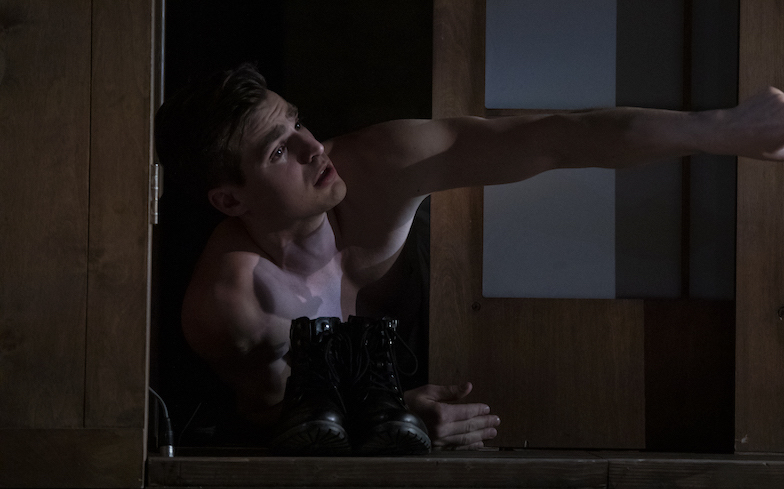 The Ex Machina production, written and directed by Robert Lepage, has opened at the National Theatre.

Reviewing a show like The Seven Streams of the River Ota is a tricky feat in that there’s nothing else quite like it out there. We’ve seen epic plays with long run times before – The Inheritance, Harry Potter and Angels in America all spring to mind – but these all had the options of being broken down across a couple of nights for a more easily-digestible theatrical experience. This show demands its audience’s attention for a single seven-hour sitting (fear not, there are plenty of intervals) – but it’s certainly not an easy watch. The opening act runs at 105 minutes which is longer than several West End shows right now.

Arguably its most remarkable achievement is that it manages to be perfectly accessible. Lengthy running time aside, it also covers a series of subjects which aren’t the most conventional in the theatre. The play unfolds over the course of seven chapters, each giving us a snapshot into a different time and place; they’re all linked to events before, during and after the Hiroshima and Nagasaki bombings. One scene is set in a concentration camp in the 1940s, while another takes place in Amsterdam during the 1980s at the height of the HIV/AIDS crisis.

So we’ve factored in that it has a very long run time and covers some challenging topics, and we’re also throwing into the mix that the play is largely performed in French, with smatterings of Japanese and German and occasional English for good measure (there are surtitles for the various languages). Given all the barriers to accessibility, it’s surprisingly easy to watch. There are lots of elements which work very well indeed – the events unfold slowly and are allowed space to breathe, while the acting performances are perfectly understated.

The set is a sight to behold, wonderful yet deceptive in its simplicity. For much of the show it is a house on the bank of the River Ota, but over the course of the play we see it fold itself into a train carriage, or a railway station, or a hall of mirrors and then back into the original house. There are occiasional video elements which integrate well into the overall audio/visual experience. We have live musicians visibly on the set regularly, adding an authentic soundscape into the mix.

We don’t want to say too much about the story, as the real beauty of the play is in getting to know its characters over a timespan of several decades in locations all over the world. Each of the seven chapters has a unique feel to it – some are extremely dark and harrowing, others are much more lighthearted and humorous. They are all full of charm and enable us to invest that little bit more in every story as it progresses. By the end we really cared about each of the characters and what would happen to them.

We’re not going to try and argue that this is a play that gets everything right or that it will have universal appeal. Some will be put off by the length, others by the difficult subject matter. But at its heart is an extremely rewarding theatrical experience. This is an unusual time for the arts in London, and we’re not sure how much longer the theatres will remain open – but if you’re able to get to a performance of this you won’t leave disappointed. Ambitious, epic and beautifully humane, it’s frankly an incredible achievement and we doubt we’ll see anything quite like it for some time.