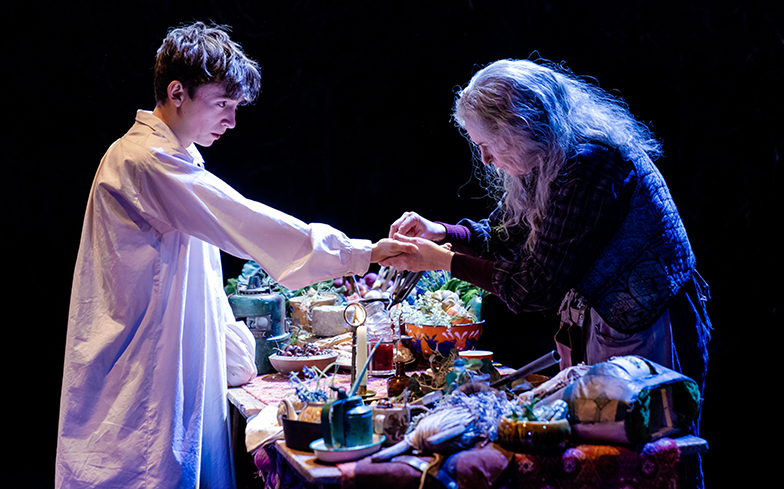 For those unfamiliar with the fantasy novel, the source material for this play presents a number of challenges. Neil Gaiman has created a magical world which is under attack from a shape-shifting monster curiously reffered to as a ‘flea’. Our protagonist, an unnamed boy, and a coven of spellcasting woman who inhabit a local farm are the only people standing in the way of this mysterious creature. It’s a show set across multiple locations, full of magic and mysterious creatures – not an easy feat to pull off in an intimate space like the Dorfman.

The Ocean at the End of the Lane absolutely triumphs. A winning combination of puppetry and special effects mastery combine to create one of the most extraordinary theatrical experiences we’ve ever seen. We only see the flea once in its true form – some sort of giant arachnid-type creature – but when we do it’s genuinely terrifying. Other monsters are more hinted at that shown explicitly, but this is perhaps even scarier, leaving us to imagine the worst. Further puppetry and effects are used to create the swimming scene and it’s utterly captivating.

Of course, all the production values in the world would be for nothing if the acting wasn’t up to scratch, but here the show excels too. Samuel Blenkin, who plays the boy, is superb – no stranger to theatrical magic, he recently completed a stint in Harry Potter and the Cursed Child. His wide-eyed bewilderment at the world around him absolutely resonates with the audience. Pippa Nixon, who plays the flea in its human disguise as lodger Ursula, is also fantastic – malicious, cool and calculating, she plays the villain brilliantly.

There’s so much here to enjoy that it’s difficult to condense into a few short paragraphs. Credit must go to Paule Constable’s lighting and Ian Dickinson’s sound design – they come together wonderfully to create an expansive, sprawling other-world which makes us forget we’re in a relatively limited space. Jamie Harrison’s magic and illusions consistently amaze – plenty of scenes, such as the one where Ursula springs forth from numerous doors far more quickly than she could have reasonably got to them, left us scratching our heads.

It’s difficult to find fault with this production. As is the case with any adaptation, fans of the book may find the locales and creatures aren’t quite as they imagined them – but Joel Horwood has done a superb job of adapting these to the stage, creating a haunting, enchanting world in the process. All of the elements come together to make a satisfying whole – this really is theatrical magic at its very best. We feel as though 2019 has been a bit of a mixed year for the National Theatre, so it’s wonderful to end on a high with this. It’s only on for a limited run, but surely a West End transfer will follow – it deserves one.