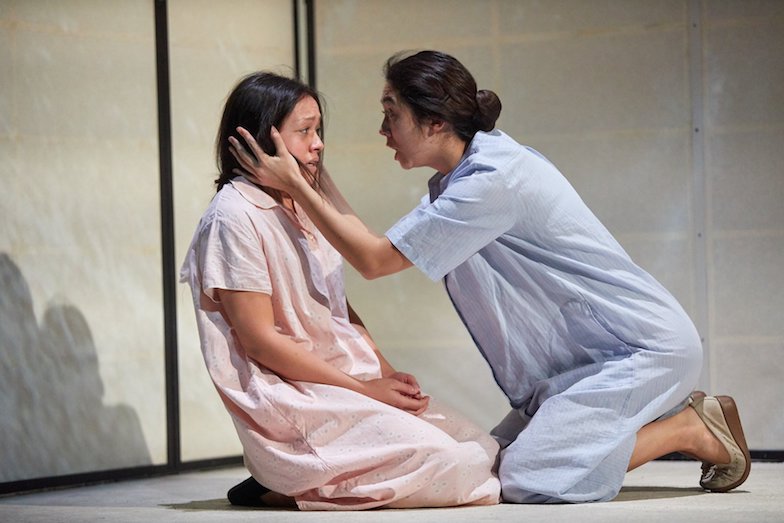 Based on real events, Francis Turnly’s new thriller packs a real punch as it premieres at London’s National Theatre.

The Great Wave is certainly ambitious. Taking place over a quarter of a century, it tells the story of Hanako (Kirsty Rider), a Japanese schoolgirl who is abducted by a North Korean task force and taken against her will to live in the isolated nation and train their spies. There are parallel narratives, one where she adapts and attempts to forge a new life under the regime, and another where sister Reiko (Kae Alexander) and mother Etsuko (Rosalind Chao) search relentlessly for answers.

This is a genuinely compelling and gripping story with some really emotionally-charged moments. It shines a light on a difficult and still quite cloudy period of history, and there are some really gripping scenes – without wanting to spoil anything, Hanako’s receipt of a video message is very touching, while there were very few dry eyes in the house during the reunion attempt at the play’s conclusion.

It’s a technically impressive piece, too. Opening with a bang – a noisy thunder and lightning strike certainly grabs the audience’s attention – there is clever use of audio and visual throughout, allowing for an immersive experience which is a treat for the eyes and ears. Events progress at a rapid pace; this is facilitated by Tom Piper’s cleverly-utilised, simple yet effective modular set – it twists and pivots across the stage, sliding doors subtly adjusting to create new spaces allowing for seamless scene changes.

It’s not perfect, however. We had some issues with the script itself – while we understood that the initial scenes were deliberately quite simplistic as the characters were in their infancy, the dialogue was never convincingly childlike. While this improved over the course of the play, there were still numerous moments were we felt the exchanges remained a little stilted.

We also weren’t convinced with how some of the characters developed over the lengthy time frame. Kirsty Rider seemed to accept her fate pretty quickly allowing little room for manoeuvre, while Kae Alexander – although impressively convincing as a passionate campaigner – didn’t seem to change substantially between teenage schoolgirl and 40-something adult. Conversely, while the North Korean officials obviously had limited opportunities to convey emotion, we did enjoy Kwong Loke’s amusingly dry outlook towards life in the play’s latter stages.

The Great Wave is an ambitious, impressive new piece of theatre which largely succeeds. While it may not be flawless, it tells a fascinating, absorbing and incredibly powerful story with some genuinely affecting moments. It also draws attention to a little-known era of Japanese-North Korean politics which feels incredibly relevant given current tensions across the world. Absolutely worth checking out.