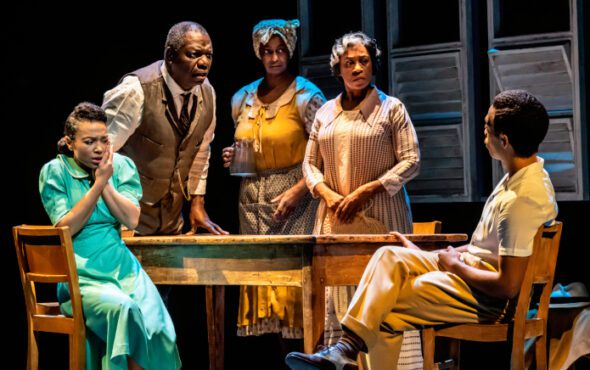 Small Island was a huge hit for the National Theatre in 2019 and, at the time, was greeted with rave reviews – it’s easy to see why, and it’s no surprise that it has been brought back so soon after the theatre’s re-opening. Helen Edmundson’s adaptation of Andrea Levy’s novel is an absolutely epic tale – clocking in at comfortably over three hours, it tells the story of Jamaican couple Gilbert (Leemore Marrett Jr) and Hortense (Leonie Elliott) as they arrive, via the Windrush, into a post-war London that gives them anything but a warm welcome.

It may be a lengthy play but it covers an awful lot of ground. Proceedings actually begin just before the Second World War and we gain a snapshot into the life of Queenie (the excellent Mirren Mack), who dreams of escaping her country life on a Lincolnshire farm and moves to London, marrying Bernard (Martin Hutson) out of convenience so that she has financial security to stay there. When Bernard is sent away to war, Queenie takes in a variety of lodgers to get by; hers is a unifying role throughout the production, as it’s the various lodgers that she takes in that bring the disparate narrative strands of the play together.

There are too many excellent acting performances to name them all, but a couple of notable mentions include Rachel Lumberg, who has a brief but scene-stealing turn as Queenie’s Aunt Dorothy – she’s not on stage for long, but most of the play’s biggest laughs belong to her. We also adored David Fielder’s loveable Arthur, a man who hasn’t spoken a word since witnessing the atrocities of the previous Great War – but he’s a man who simultaneously says so much while saying nothing at all. Again, his is a fleeting appearance, but a genuine delight.

We could go on and on about how much we adored Small Island. It absolutely made us feel all the emotions – we left the theatre completely drained, but in the best possible way. The text is peppered with absolutely hilarious punchlines, even if the stories that are told are often desperately sad. It’s a play full of warmth and humanity, and in spite of the lengthy running time, retains a real urgency – we were engrossed throughout. Utterly captivating theatre – not to be missed.