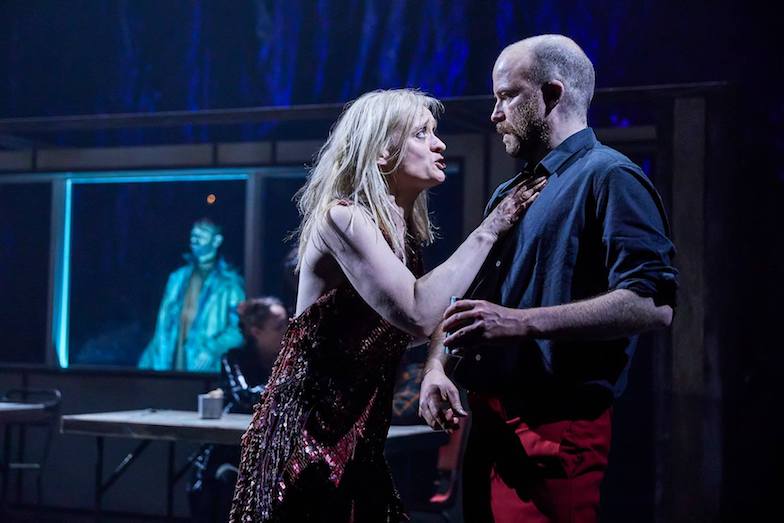 It has a stellar cast and plenty of ideas but this new staging of the Shakespearean classic falls far short of expectations.

Rufus Norris’ new production of Macbeth has a rather grim, startling opening; we see a character’s head being severed, placed in a bag and hung high up on Rae Smith’s impressive, oppressive set. More shocking than this, however, is that the violent tone never really lightens – while of course this play is one of the great tragedies, it’s a dark opening and the tone only gets gloomier throughout.

Bathed in a dim, post-apocalyptic half-light, the story plays out in a space frustratingly devoid of any sense of location or time; it is simply a desolate wasteland. It certainly had a look, and elements of the set design were technically impressive, but it wasn’t really obvious what the significance was. We weren’t quite sure on the costume ideas, either – was there a reason that armour was sellotaped on? – whereas some outfit metaphors just seemed a bit clunky or obvious.

Related: 120 BPM is an exhilarating and moving portrayal of a community galvanising during a crisis – review

Rory Kinnear and Anne-Marie Duff take on the leading roles – both fine actors, but their talents are not utilised to full effect here. They both have promising moments – Kinnear is initially believable as a decent man in a less-than-decent world, but his descent into madness amounts to little more than shouting and kicking some chairs; Duff is compelling to watch and, at times, genuinely seems to have a pained conscience. Yet neither really explore the depth or nuance of the duo, while the delivery of several significant – and hugely famous – soliloquies often feel lacking in gravitas.

There are a handful of enjoyable moments. We were impressed with some of the technical elements – the giant, sweeping ramp is rotated and used effectively throughout, while some buildings would twist and reveal a variety of nooks and crannies that an actor could contort their way out of. The sound design works well, too – it certainly adds to the overall bleakness. On a different note, Trevor Fox, as the Porter, offers some much-needed comic relief on occasion, with a few amusingly-delivered one-liners.

While this production of Macbeth may have some interesting ideas, they never seem to quite gel – it all just seems a bit incoherent. It’s a noisy and violent production that doesn’t seem to say very much – and while it would be harsh to describe it as full of sound and fury, signifying nothing… we were really hoping for so much more.