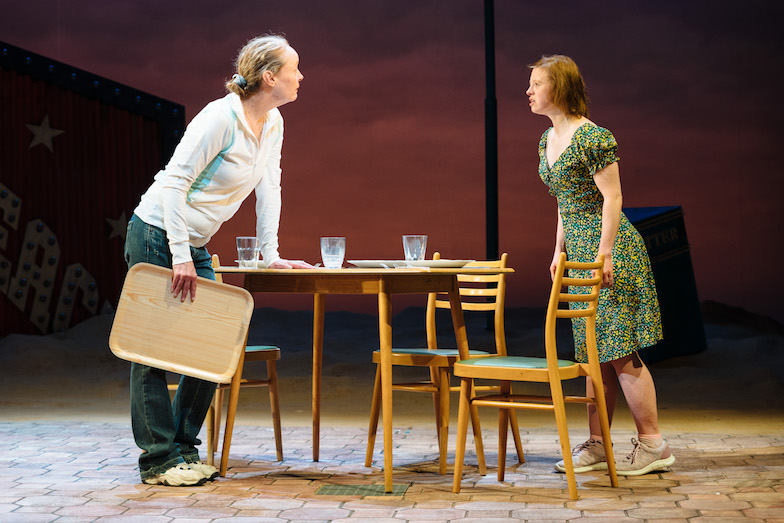 Jellyfish tells the coming of age story of Kelly, a girl with Downs Syndrome who lives with her mother, Agnes, in a small seaside town. With a deliciously dirty sense of humour Kelly is quite a character, leading to local boy Neil falling for her charms. Agnes – and the rest of the townsfolk – are not entirely accepting of their unique romance, leading to the play posing questions around whether everyone should really be free to love who they want.

Weatherill’s play has many wonderful moments. The relationship between Neil and Kelly is played with a real tenderness and is full of humour; Kelly’s friend Dominic (played by Nicky Priest, a comedian with Asperger’s) is hilariously awkward and deadpan; there are a number of intelligently-observed and thought-provoking conversations, particularly between Neil and Agnes.

Underpinning everything is a standout performance by Sarah Gordy, the actress with Downs Syndrome who depicts Kelly. She plays the part magnificently, with a real vivacity and mischievous quality. It’s an impressive cast all-round – Sion Daniel Young is gentle and genuine as Neil, while Penny Layden is strong as Agnes, a fiercely protective mother who lashes out whenever her daughter may be threatened.

While it may be a cute and charming play, it certainly doesn’t shy away from difficult questions. Central to the dramatic tension is Agnes’ fear not only for losing her role as Kelly’s primary carer, but also that Neil’s intentions may not be as pure as he insists. Some tricky moral dilemmas are posed, too – can a non-disabled person have a successful, mature relationship with someone who has Downs Syndrome? Should they try to start a family, in the knowledge that their child may have the same condition and that Kelly may struggle to care for it?

Jellyfish gets a lot right. It’s an intelligent and humorous play, which tells an interesting tale and challenges its audience with some thought-provoking questions. It’s also a truly heartwarming love story – and we could all use more of those right now.