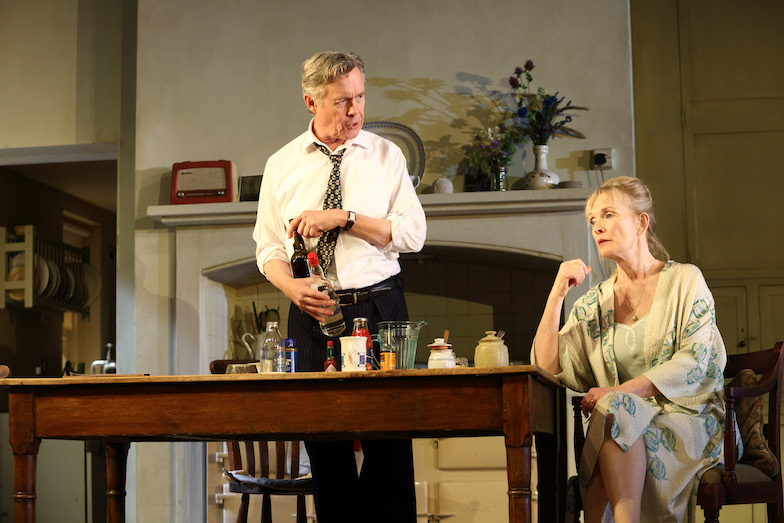 Set in the Cotswolds on a Saturday morning in May 1988, Hansard tells the story of Robin Hesketh (Alex Jennings), a Conservative politician who is part of Margaret Thatcher’s government, and his wife Diana (Lindsay Duncan). Robin has just returned to their constituency home following a key vote on Section 28 to find his wife has woken up with a terrible hangover. Diana is struggling to reconcile her husband’s political ideology with her own more liberal and progressive values; the resulting play is essentially an 80-minute argument, during which long-held secrets are brought to the surface.

It’s a hugely entertaining political satire – this brief two-hander is full of deliciously vicious one-liners. A few miss the mark, with a couple of crass moments, but the majority land effectively resulting in an enjoyable verbal sparring match. Diana has most of the zingers – her quip about old Etonians is hilarious – but Robin certainly pulls his fair share of punches. There’s a sudden shift in tone towards the play’s conclusion, with a late revelation about the couple’s son – it could have jarred with the otherwise lighthearted show, but it works well here as it’s handled sensitively and intelligently.

The evening is really elevated by two standout performances – both actors are Olivier winners and it’s not hard to see why. Jennings convincingly portrays a repulsive sense of entitlement and some dated, misogynistic opinions while still hinting at a slight vulnerability underneath. Duncan, meanwhile, is effective in demonstrating a woman who is denied an opportunity of her own by trying to play a traditional conservative wife role in their relationship. Both power the play along with expert timing – not a beat is missed during the 80-minute duration.

We thoroughly enjoyed our evening with Hansard. It’s a short, simple and straightforward prospect, but one that’s executed very well indeed. The script is full of amusing punchlines, the quality of the acting really is excellent, and it manages the feat of ending a comedy on a thought-provoking and poignant note surprisingly effectively. Well worth checking out.