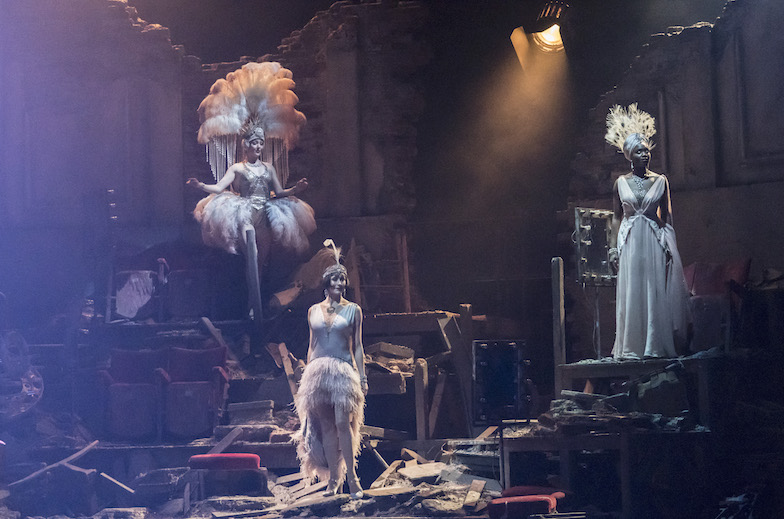 Gosh, they just don’t make ’em like this anymore.

Not the words of somebody on stage, but us moments after leaving the National Theatre’s production of Follies. And in fact, the sentiment is true. Old Hollywood glamour always does seem better back in days of community and the true love of show business shining bright. Of course, all this does exist in a new form now, but it just never quite seems as thrilling as it does in the pictures.

Returning to the National Theatre after a sell-out run last year, Stephen Sondheim’s Follies takes us to a meeting of actors and once friends as they come together for one final time. As the building they once all worked in together and created both theatre and relationships comes to an end, there’s unfinished business to be discussed and bubbling old love to be explored. That is, alongside a few humorous and heated encounters. But heck, this is a Sondheim musical so we’d expect nothing less!

Set to the score of the musical genius, Follies features an array of hits including Beautiful Girls, I’m Still Here and, the iconic, Losing My Mind. In turn, it’s quite frankly pure theatrical gold, just as we’ve come to expect from the NT.

Dominic Cooke’s production is thrilling throughout, mixing the younger faces of before with the mature and experienced people of today. Tracie Bennett’s fading but still confident star hitting a particular spot we connected to on more than one occasion. Her performance of I’m Still Here a real standout alongside Janie Dee; bold and brassy, it take a mature woman to kick these messy men into order and she does that with surprising grace and power. Mess with her? We wouldn’t.

However, it’s Joanna Riding – new to this returning production, replacing Imelda Staunton – who storms to an almighty victory here, securing off why Follies is still a triumphant piece of theatre. Full of poise and beauty, it’s a heartfelt and rather imperfect nervousness that means, regardless of her age, she’s as messy now as she was all that time before. And when you’ve Losing My Mind as yours, you’re onto a winner.

Like many, we’ve seen Follies before, but you haven’t ever seen it done as well as this. And much like the talent on display, it feels like a real gift to get to experience it first-hand and inside our favourite theatre in London. God bless a classic musical.