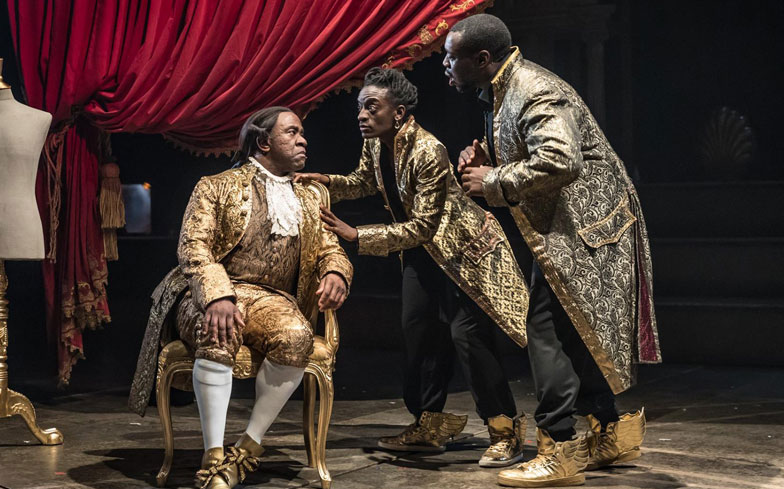 Lucian Msamati’s star turn lights up the Oliver stage with every twist and turn of this compelling and deeply emotive tale.

Adam Gillen takes up the reins as musical prodigy Mozart as he arrives in Vienna, meeting jealous court composer Antonio Salieri – perfected here once again in this returning production by Lucian Msamati. Amadeus presents a battle of power and ego and, as his jealously grows, Antonio addresses both audience and God in pockets of gripping monologues and emotive confessions.

Laced inside a wondrous scenic design that’s epic on both size, scale and presentation, there’s much to see as you become transfixed by Lucian Msamati and his often understated performance. Moving from his dying demise to his first encounter with Mozart, Lucian spurts a script that’s witty and complex throughout. His vulnerability of real surprise, yet ideally placed as the broken being of a man that never quite lived up to the high standards and desires he placed upon himself, his talent and his work.

Peter Shaffer’s lengthy 1979 modern classic isn’t one to shy from humour as it exaggerates dialogue and thunders through heartache as Mozart faces his demons and the troubles of success and self-standards. Can the rise of fame ever be as enjoyable as you so wish? Adam Gillen tackles his question well. Emperor, Joseph II, played by Matthew Spencer, of equal success.

Related: Beginning is a wonderfully poignant exploration of love and loneliness – review

Under the musical direction from Simon Slater, the clanging sounds of Mozart’s music is played to perfection live by the Southbank Sinfonia throughout. With live instruments on stage and the talented musicians spreading their wings into the world of acting too, there’s a deep sense of unity as music and acting become art as one.

Michael Longhurst’s production thrills on many levels – and its thanks to his superb cast that are able to present a tale that’s gripping and exciting in equal measure. Although it can feel a little lengthy, such are the pockets of monologues, they leave the audience listening intently as this unfamiliar story unravels. And when presented inside a design that only the wonders of the National Theatre could deliver, we were mesmerised at the sheer epic brilliance of Amadeus.