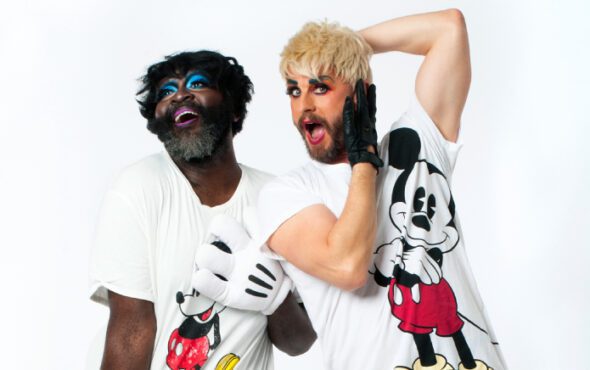 Dubbed the “ebony and ivory of drag”, Le Gateau Chocolat and Jonny Woo bring their new musicals-themed show to London for a limited run.

Olivier Award-winning drag act and opera singer Le Gateau Chocolat has teamed up with queen of the alternative drag scene Jonny Woo for this one-act musical revue at London’s Soho Theatre. Unsurprisingly it’s a bit different to a straightforward musical theatre offering – while there are a few more conventional moments, it drifts off to karaoke, singalong and dance-along segments, with plenty of ridiculous costumes and camp silliness thrown in for good measure.

There are plenty of enjoyable moments. There’s a strong start to proceedings with an entertaining duet of Big Spender, swiftly followed by a tenuous link into One Night Only, which has some deliberately terrible improvised choreography. It’s a show which is very much bookended with highlights – these two are an enjoyable start, and there are some fun singalong moments for Grease and The Sound of Music towards the end of the evening. However, in the middle things do seem to lose pace and the direction is a bit all over the place.

Given that both artists can sing, the show did seem to lean a bit more heavily than we’d have liked on lip sync numbers – there are a few of these and some are noticeably stronger than others. Generally speaking we much preferred the songs which involved live singing. We were also a little surprised by how relatively tame the show was – there’s one surprising moment from Jonny involving an amusingly-placed confetti cannon which really got the audience going – we were rather hoping for more of this.

Now That’s What We Call Musicals is certainly a perfectly enjoyable camp musical revue, and a nice way to spend a little over an hour with a couple of entertaining drag artists – but we felt it could have offered so much more. We were expecting something a bit bigger, more exciting, more dangerous, more boundary-pushing – instead what we had was a fun evening with some queer retellings of songs from musicals that we liked, but didn’t love.