Noises Off an enjoyable evening of entertainment – review 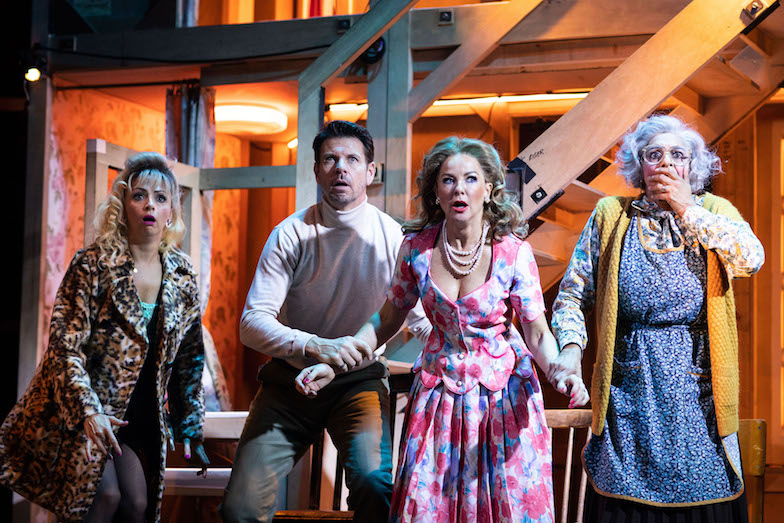 For those unfamiliar, Noises Off is pretty much the original play that goes wrong. It concerns a small acting troupe putting together a production of a comedy called Nothing On, which is about to open in Weston-super-Mare before embarking on a regional theatre tour. During the first act we witness their technical rehearsal ahead of opening night, while the second act allows us to watch their performance from backstage, with all sorts of theatrical shenanigans happening behind the scenes, then eventually from the front of house.

At times it all gets a bit meta – we are watching actors playing actors, who are putting on a show within a show. Thankfully a talented, big name cast has been brought together for this production. In particular we enjoyed Meera Syal as Dotty, who plays the well-meaning house keeper Mrs Clackett who has many of the most humorous lines. We also enjoyed Sarah Hadland who entertained both in character as wealthy tax exile Flavia and backstage as Belinda.

It’s an intricate production with many moving parts – the jokes wouldn’t work without some carefully choreographed moments or precision timing and it’s a credit to the actors that they never miss a beat. At times the pace is relentless and it does get a little bit chaotic, but at least this ensures it never loses momentum – the two hour run time absolutely flies by. We did however feel it was a little light on big laughs – it’s amusing throughout, but there’s no real standout moment. While the stage may have literally been collapsing, there were no lines that figuratively brought the house down.

Noises Off delivers what we expect it to. It’s hardly a thought-provoking show, but it doesn’t need to be – sometimes it’s nice just to switch off for a couple of hours and enjoy some silly jokes. It is also incredibly refreshing to see a piece of theatre which is entirely politics-free. The actors deliver some spot-on performances throughout and, while it would have benefited from a handful more laugh-out-loud moments, it still provides a lighthearted evening of entertainment at the theatre.