No Sweat is a moving new play about LGBTQ+ homelessness – review 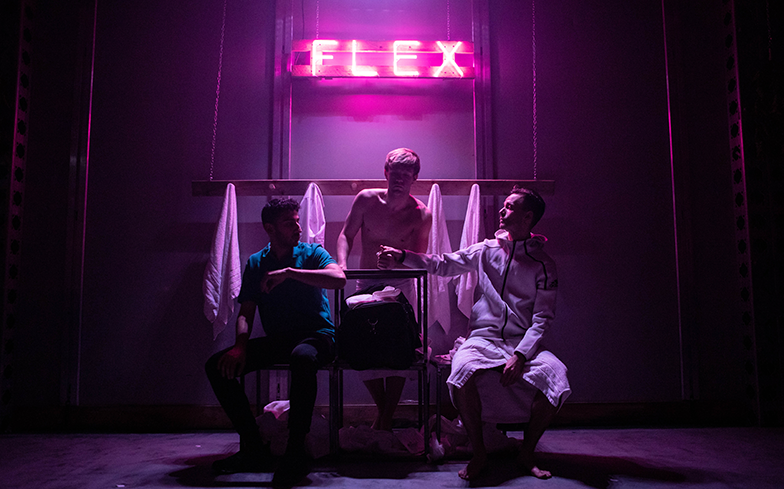 Vicky Moran has written and directed this new show at The Pleasance Theatre.

There’s no denying that No Sweat tells an important story – or, more accurately, three important stories. Over the course of 80 minutes it shines a light on the UK’s LGBTQ+ homelessness crisis. It focuses on the lives of Charlie (Manish Gandhi), Alf (James Haymer) and Tristan (Denholm Spurr) and uses a combination of real stories and verbatim interview clips to portray their respective fights for survival. Proceedings unfold in a sauna called Flex, although more generally it’s about young, homeless LGBTQ+ people seeking refuge in gay saunas.

Alf and Tristan’s stories broadly align – both kicked out of the family home after their respective parents refuse to accept them because they’re gay. Both have reluctantly turned to escorting in a bid to make some money and get back on their feet. Alf has been in the game a bit longer and has some advice for Tristan but still has his fair share of issues. Charlie’s story is entirely different – originally from Pakistan, he came to London with a dance troupe and refused to board the plane back. He’s now seeking asylum in the UK, in the knowledge that deportation could be death sentence.

There are certainly some powerful and moving moments. Two scenes in particular stand out – Charlie’s interview with the Home Office, where he’s asked for supporting evidence to ‘prove’ his sexuality and that he is genuinely at risk if he returns home, makes for thought-provoking viewing – especially when he’s asked to recount in detail an instance of ‘corrective’ rape. In a similar interview-style scene, Tristan reaches out for help only to find that as a young, relatively healthy man he’s not ‘at risk’ enough to be viewed as a priority – and is even encouraged to continue his sex work.

It’s not entirely successful, however. We thought as a whole package, it lacked a clear focus. The three stories are interesting and powerful in their own ways, but aren’t brought together meaningfully – there’s little more to the trio other than they happen to be in close proximity to each other at the time they’ve decided to share their stories. It also seems a little odd that it alludes to the LGBTQ+ homelessness crisis and makes numerous references to the LGBTQ+ community, yet focuses solely on three cisgender gay men in an exclusively gay male space.

In terms of the production elements they’re mostly fine, although we’re not sure how much the dance sequences added – in some cases they’re distracting and detract from the narrative of the scenes. Occasionally the pre-recorded elements jar with the live action performances. It’s a shame there are a few shortcomings, as No Sweat is an important play which shares some stories which need to be told. It has the potential to be really quite special, but what we have instead is something pretty decent but could be amazing.