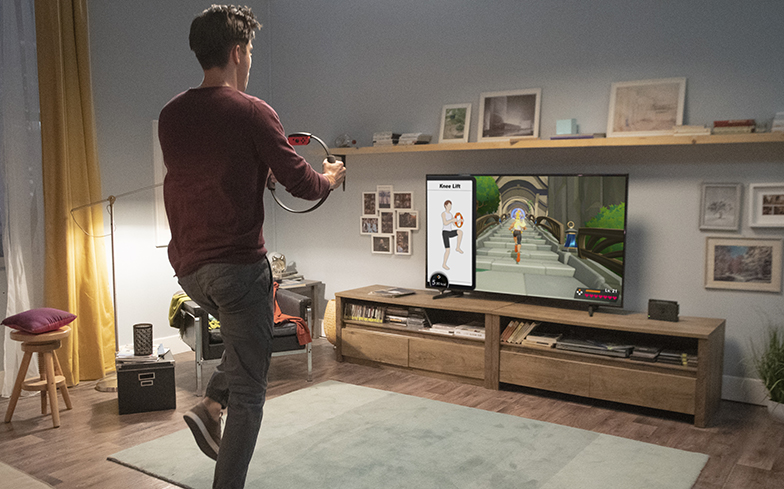 Exercising has never been so much fun.

If the thought of getting fit appeals, but you’d sooner choose a weekend of playing Mario and Zelda over heading to the gym, then Ring Fit Adventure might be what you need. Following in the footsteps of their last part-exercise part-videogame venture, the insanely popular Wii Fit, Nintendo are once again looking to inject their signature charm into the fitness market, and we’re happy to report that it’s a huge success.

Unlike the Wii Fit’s balance board peripheral, which felt best suited to yoga and novelty minigames, Ring Fit Adventure wants to get players genuinely working up a sweat with two brand new accessories called the Ring-Con (modelled off a pilates ring) and the Leg-Fit (a strap that wraps around your thigh). Inserting a Joy-Con into each accessory allows the game to precisely measure your real-world actions and mimic them on screen. Whether your running through a forest, squatting your way to victory in Fit Battles, or walking along a tightrope while collecting coins, the new peripherals do a fantastic job of immersing you in the game.

The main event on offer here is the lengthy RPG-lite Adventure mode, which sees you chase the game’s ridiculously buff, singlet-wearing dragon antagonist Dragaux through a charming cel-shaded fantasy world. The design was never going to be as memorable as other Nintendo franchises, but it’s still gorgeous to look at. Your age, weight and level of fitness will be used to calculate a difficulty level that will dictate how hard you have to workout to succeed, and you’re given the opportunity to create an avatar to represent you by selecting gender, skin tone and eye colour. Given how in-depth other games are when it comes to character creation, we would’ve appreciated a little more customisation – particularly for players who don’t want to choose between the binary male- and female-presenting options – but that’s a minor qualm in a game this enjoyable.

As you jog on the spot to progress through each level, you’ll speed up to run across falling platforms, lift your knees high to ascend stairs, push in on the Ring-Con to break boxes and jump over obstacles, and pick up coins (which can eventually be used to purchase new outfits and health-boosting smoothies) by pulling on the Ring-Con to hoover items up. Every now and then, you’ll encounter those aforementioned Fit Battles, which pit you against a variety of enemies that require you to complete sets of exercises from your repertoire. These vary from leg-burning squats to overhead presses and even the occasional yoga pose. You’ll unlock more exercises focusing on different parts of your body as you work your way through the game, and these can be targeted to specific enemies for maximum damage. The Ring-Fit and Leg-Con aren’t forgiving either – if you don’t nail that warrior pose or put enough effort into your thigh press, you aren’t winning this battle.

Unlike its spiritual predecessor Wii Fit, Ring Fit Adventure feels like a legitimate form of exercise. Even on a relatively low difficulty setting, making it through a couple of levels seemed like a good workout, and as we gradually moved up to a more intense challenge (on the advice of the game’s fitness assistant Tipp), it became genuinely difficult to make it through our daily half-hour workouts. More importantly, it never felt like a chore. We know the benefits exercise can have on both physical and mental health, so it’s hard not to see how incorporating something like this into your daily routine could have a genuinely positive impact.

Aside from Adventure mode, there’s the option to create your own custom workout plans focusing on the areas of your body you’d like to improve, and a series of minigames that serve as more of a fun distraction than a genuine accompaniment to your fitness regime. Other novelty features include checking your pulse rate with the IR Motion Camera that’s built into the right Joy-Con, and the ability to take the Ring-Con with you as the Switch sleeps, working out on the go (or while you sit and watch TV), and gaining EXP points on your return. It’s moments like these that remind you of that innovative Nintendo magic we all love.

Ultimately, what makes Ring Fit Adventure such a wonder is that it actually achieves the (seemingly) impossible by making exercise a whole lot of fun. At the end of every day we found ourselves looking forward to picking up the Ring-Con and strapping on the Leg-Con again, with in-game rewards giving a real incentive to keep up the hard work and commit yourself to a healthier lifestyle. It’s not going to give you the body of Adonis – and it doesn’t claim it will – but it will get even the most gym-averse on their feet and feeling the burn.

Ring Fit Adventure is released for Nintendo Switch on 18 October.