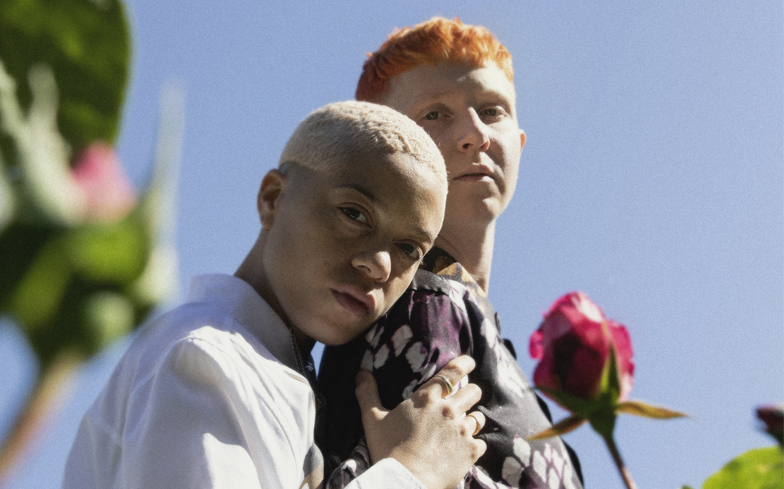 It’s been a long road for Nimmo towards their full-length debut album, titled The Power.

The band – consisting of Sarah Nimmo and Reva Gauntlett – were busy working on the collection three years ago as part of their major label deal with Sony that they’d pretty much signed straight out of uni, before they came to the slow realisation that the system they were operating in wasn’t quite working for them.

“We would come up with something simple and everyone gets excited, and then for some reason it then became a really slow process,” Sarah now explains, looking back on the events that unfolded. The pair left the label on amicable terms, taking the music they had been working on with them. But they were yet to face their toughest test.

In order to pay the bills they had to get full-time work in bars and cafes, and then use any extra time continuing to write songs and achieve their ambitions of a career in music. “You’re still absolutely adamant that what you’re going to still call yourself a musician,” Sarah says. “That’s still your job title in your head.”

The hard work paid off, and now Nimmo have finally unleashed their debut album. Preceded by a handful of new tracks – including the brilliant Everything I Wanted – the queer female duo have overcome adversity to give their fans that long-awaited first chapter.

Congratulations on Everything I Wanted – how have you found the response?
Sarah: It’s been great. It’s a track we wrote that was part of the ceiling of the album process. When we left Sony and then we had all these songs that we didn’t know whether to use or not, we started to piece it all together. But then we wrote Everything I Wanted just at that moment. So for us we have loads of emotional attachment to it as it represents that new step for us. You’ve had the freedom to release music more consistently regular over the past year – have you enjoyed that process?
Reva: I’ve enjoyed that process so much more. The thing is, when you’re on a major label pushing through the smallest idea takes the longest amount of time, and then you kind of forget what ever really excites you about that idea and even what is was! So being able to have that freedom has been great, and do you know what? People have been receptive to that independent stance. They’ve been talking about that a lot, and it feels really positive.
Sarah: It’s nice because you can set your own rhythm. If you’re going to sign a deal, that’s the right way to go into a label be like, ‘This is how we’ve been doing things, this is what works for us, and this is how we want to make video.’ We’ve been making videos in so many different ways, and the last one we just made which isn’t out yet, we made it in two days for £10. I think it’s probably our best video!

It’s been quite a journey for you both to get to this debut album – how are you feeling about it now it’s finally coming out?
Reva: It feels like a big relief to be honest. Obviously we started it at Sony, so it’s been a four-year piecing together. It’s just become so many different albums. It’s funny because on my iTunes I’ve got ‘Nimmo album 2014’, ‘Nimmo album 2015’, ‘Nimmo album 2016’, and so on.
Sarah: We were discussing this the other day. It’s been really nice to have loads of different experiences over those four years and be able to have them all feature on this album. Instead of it being a snapshot of a time – which I also love and that’s what we’ll do for the next record – it’s been really nice to have this overlook of the whole of our twenties. Being able to see all the light and dark, and you can hear us learning and discovering ourselves. There’s something quite cathartic about that. How difficult was it to walk away from your major label deal? Did you know in your gut that you needed to step away?
Sarah: It was a slow realisation on everybody’s part that it was just hard to get things done. We would come up with something simple and everyone gets excited, and then for some reason it then became a really slow process. Everybody was feeling that. It was just something in the way the system was set up.
Reva: There were things that were changing internally as well in our band, in terms of members and things, so it was just harder to go through that process with them as well.
Sarah: At the same time everyone started to realise it just didn’t feel right. Then loads of changes happened in the company. Our whole team went and loads of other artists went on the same day we did. We got all our music back and it was very amicable.

What was the biggest challenge you immediately faced after that?
Neva: Well when you part with a major label and go back to a day job, it’s so tough.
Sarah: When you’re doing that full-time work again to pay the rent, you’re still absolutely adamant that you’re going to still call yourself a musician. That’s still your job title in your head. So you’ll be on your feet for 12 hours and you’re absolutely dead, and then you’ll be writing songs. Like, we were writing songs with Aaron Porter in the cafe we were working in the evening. Those are the moments that are the hardest.
Reva: It was the classic artist thing of having to juggle it all. It was definitely the hardest thing we’ve been through.
Sarah: Thank god that it’s now our job again!

There’s been such a surge in brilliant queer female music talent in recent years. Why do you think it took so long for LGBTQ women to gain the level of recognition they are achieving now?
Reva: We often think about this.
Sarah: I think there’s something very challenging about an androgynous woman’s appearance. It’s still not something socially understood or accepted. There’s not enough spaces for lesbians who aren’t femme to confidently explore themselves. I know that from working at The Glory and I really noticed that the male gay nights were so hedonistic with an incredible atmosphere. Everyone was taking their clothes off and going wild and enjoying themselves being free. The women nights just didn’t have that air of excitement. They were just a little bit contained. That’s just my observation – I don’t know what that means.
Reva: It’s strange though because in the 80s, they might not have been queer but Annie Lennox and Grace Jones made androgyny a thing. But then it kind of disappeared.

Oh but then there was very little representation for queer women throughout the 90s and 00s.
Reva: Yeah, and it’s weird because you look further back in the 70s and 80s and some of the stuff is crazy. There were a lot more women breaking those androgyny boundaries. Then I think queer pop music just got diverted towards gay men.
Sarah: Yeah, and that whole ‘fag hag’ culture – which is disgusting – a lot of straight women adopting gay men, so it became a fashionable accessory. It wasn’t the same for lesbians. Straight men weren’t like, ‘Oh this is my lesbian mate’. It didn’t happen like that, so queer women kind of got forgotten. Same-sex love between women isn’t controversial enough, or recognised as ‘real sex’. All of these things people say. It’s something we still talk about all the time. It’s crazy to us how little representation there is for queer women in the public eye – mainly queer women who are androgynous and not femme.
Reva: There’s obviously someone like SOAK who is doing amazingly. So it is slowly coming back.

What more can be done to protect and support queer women in music going forward?
Sarah: It’s obvious to say giving them visibility and a voice, but I feel like the relationship side between queer women is not spoken about. I don’t feel like there’s enough cover stories or really revealing press that delves deep into what it is to be a gay woman. That’s just an instinctive answer. I don’t know how that really protects, but there’s just a bit of a muting of it all. That’s how I feel. It’s just a bit blurred out. Like, it’s hot and it’s cool, and it’s just as hot as any other sexuality that’s going on.

I’m sure you get asked this quite often, but what does Pride mean to you?
Sarah: Well, Pride has started to mean more and more to us as we’ve got older. We had quite a relaxed experience in our teens with coming out and things like that, so we didn’t feel like we needed Pride events that much at that point in our life. But actually, becoming an adult and learning more about your sexuality and your status, it has become quite important to us. It’s definitely become important for us to talk about our sexuality and be proud of it, and to think about how it affects other people in other countries.
Reva: Like when we were talking about the 90s and feeling like no-one was there, it’s about taking a stand now and being proud of it. People had to be the first to do something, and that’s something we are a lot more conscious of now.

Nimmo’s new album The Power is available to download and stream now.