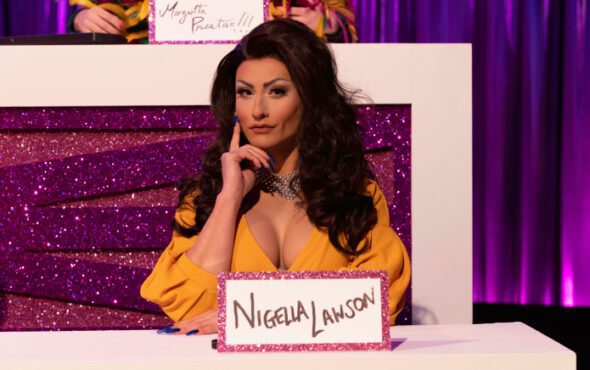 Later, Lulu made her Drag Race debut as she watched the contestants sashay down the runway in fruit-inspired couture.

During deliberations, Choriza and River received much harsher critiques than their sisters for their impersonations of Margarita and Amy, respectively.

For her impersonation as Micro-Wavay ambassador Nigella, Ella received overwhelmingly positive remarks, with RuPaul telling the contestants – as well as aspiring Drag Race stars at home: “If you want to know how to do Snatch Game, this is it. You did it.”

Unsurprisingly, Ella walked away with her second maxi-challenge win – meaning she ties Krystal for most wins (so far) – while River and Choriza found themselves in the bottom two for the first time.

Although Nigella confirmed that she initially missed the episode and finds impersonations “slightly disconcerting,” she caught up on iPlayer and has since shared her views on the impersonation.

I was on a train when it went out, so missed it. Although it’s always slightly disconcerting seeing myself impersonated, I am actually looking forward to catching up with this on iPlayer at the weekend!

After watching Ella’s performance, Nigella responded to a fan on Twitter and revealed that she “was nervous” before seeing it.

She said: “I was nervous, I can tell you, before I watched it, but utterly charmed when I did!

One of Nigella’s fans wrote that the cooking icon seems like someone “who doesn’t take herself too seriously,” adding that they hope she enjoyed the show.

“I found it utterly, camply, enchanting,” Nigella confirmed in response.

She went on to call Ella “divine” and said she has “nothing but admiration” for her.

I have and Ella was fab!