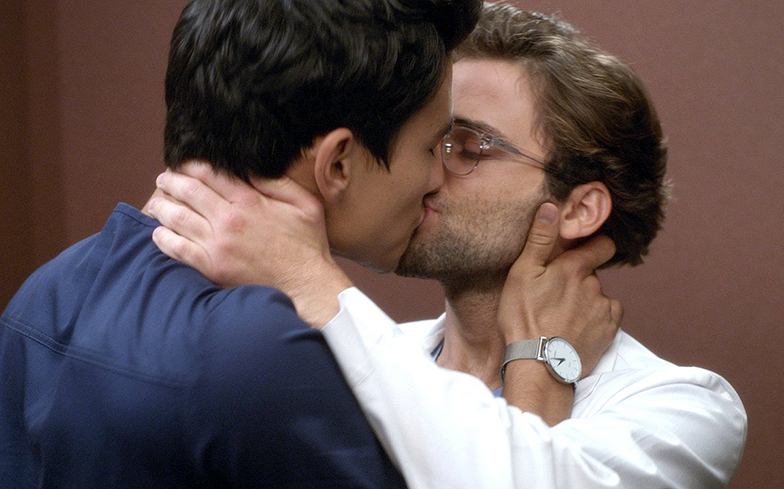 Earlier this year, it was announced that the long-running and critically-acclaimed TV series would be breaking even more new ground with its first romantic storyline between two main male characters.

That promise came to fruition on this week’s episode of Grey’s Anatomy, when new doctor Nico Kim (Alex Landi) made a move on intern Levi Schmitt (Jake Borelli) after weeks of flirting and mixed messages between the two.

While Nico is openly gay, Levi has been less sure about his sexuality, and viewers have previously seen him having a one-night stand with colleague Jo Wilson, so it wasn’t clear to viewers if he was actually interested in Nico or not.

That doubt was put to rest when Nico kissed Levi in an elevator at work and he liked it, essentially confirming that Levi was into dudes.

But when Nico found out that he was the first man that Levi had kissed, he got scared off, saying he can’t “teach” Levi how to be gay. We’re keeping our fingers crossed they can move past that and give us more same-sex loving on our screens.

Watch the steamy moment below.

Oh hello! Is it getting hot in here!? #GreysAnatomy pic.twitter.com/vNMpDaWRab

Fans loved the scenes, and it led to an equally celebratory moment in real life as actor Jake used the opportunity to open up about his own sexuality, and how much the on-screen relationship meant to him.

“As a gay guy myself, tonight’s episode was so special to me,” he wrote.

“This is exactly the kind of story I craved as a young gay kid growing up in Ohio, and it blows my mind that I’m able to bring life to Dr. Levi Schmitt as he begins to grapple with his own sexuality this season on Grey’s Anatomy.

“His vulnerability and courage inspire me every day, and I hope he can do the same for you. To all of you who feel like little Levis out there, know that I do too, that you are seen, and that we’re all in this together.

“And to everyone who has supported me over the years, I can’t thank you enough, and I love you more than all the stars.”