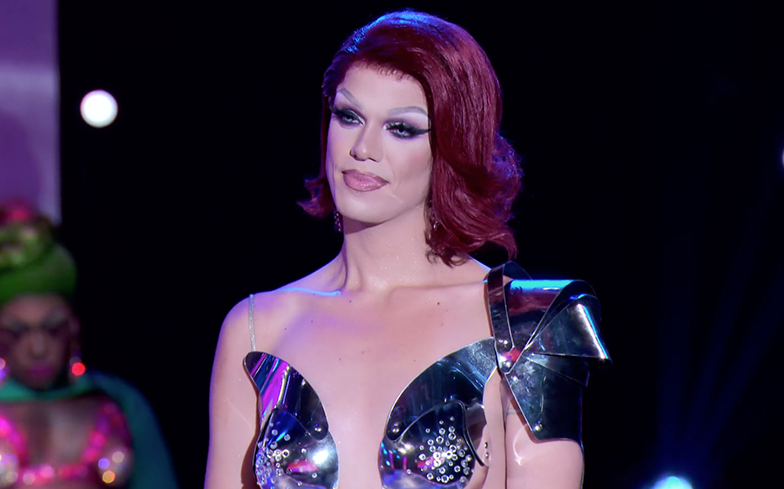 Although she left us slain week after week with her high-fashion runways, kooky personality and charismatic confessionals, Nicky Doll sadly became the third contestant to sashay away from RuPaul’s Drag Race season 12 last week.

The French fashionista lost her place in the competition after failing to impress RuPaul and the judges – including special guest star Normani – with her role in the longest-running drag queen medical drama in HERstory: Gay’s Anatomy.

Despite leaving much sooner than she – and fans – anticipated, Nicky tells us that she feels “at peace” with her elimination.

“It was not easy the day after it happened, but now I’m seeing myself on TV and can understand why the judges were having a hard time seeing my personality,” Nicky admits of how she came across on the series.

Throughout her time on the season, the star struggled to showcase her authentic self because of the language barrier. Because of this, and her status as a fashion queen, Nicky felt like she “needed to fight twice as hard to show my personality”.

She adds: “There’s a stigma about fashion queens, so I wanted to show that I’m more than just that.”

Nicky continued to say that when she entered the werkroom, “it felt like it was an All Stars season. It didn’t feel like a regular season. I was able to see who was my biggest competition, but I couldn’t see who was the weakest link.”

She then opined that season 12 “feels like the strongest cast since Season 6,” which memorably boasted contestants such as Bianca Del Rio, Adore Delano, Courtney Act, Darienne Lake, BenDeLaCreme, Gia Gunn and Laganja Estranja.

When it comes to her favourite moment of the experience, Nicky reveals: “The best part was showcasing my art and sharing my story in and out of drag. People need to understand who we are as people outside of drag as well.

“It was also just the validation of being on the show and getting feedback from a big professional in the industry. I didn’t have a lot of drag friends before, and now I have a full sisterhood.”

Obviously, we had to ask if Nicky would make her ruturn for a future season of All Stars. The queen confidently told us: “I would most definitely, and I would win it.” Does All Stars 6 belong to Nicky Doll? We’d love to see it.

On next week’s episode of RuPaul’s Drag Race, the 10 remaining contestants will play… Snatch Game! Who do you want to see impersonated on the iconic challenge? And who do you think will slay? Let us know in the comments!

Related: This was one of the wildest episodes of Drag Race Untucked ever.